‘Why haven’t we seen the leaders of Antifa and BLM arrested?’

During his Monday night broadcast, Fox News host Tucker Carlson asked acting Department of Homeland Security (DHS) Secretary Chad Wolf: “Why haven’t we seen the leaders of Antifa and BLM arrested and charged with conspiracy under RICO like the heads of the mafia families were?” 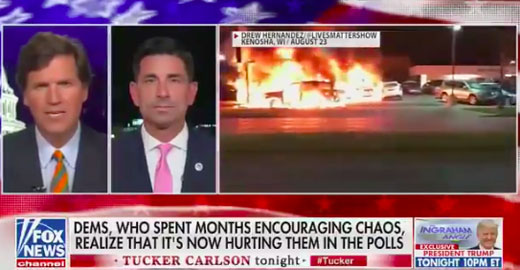 “Do you think the Department of Homeland Security is getting the help it needs from the Justice Department?” Carlson asked.

Wolf responded: “Well, this is something that I have talked to the AG personally about. I know that they are working on it. Look, we have seen about 300 arrests across this country regarding civil unrest and protesting, violent protesting and I would say, criminal protesting.”

Carlson: Chad Wolf runs the Department of Homeland Security. He is the acting secretary. We are happy to have him on tonight. Mr. Secretary, thanks so much for coming on. Joe Biden today threatened, announced, predicted, choose your verb, that the president is reelected, we will see more violence. Are you worried about that?

Wolf: I’m not, Tucker. I would say that that is a delusional statement. The idea that the president, or this administration, or the Department of Homeland is somehow the reason or the cause behind this violence is just absurd. Look, the department has been at this since early July, particularly in Portland, addressing some of this violent rioting and looting that was occurring and anarchists targeting a federal building in Portland. So, we’ve been at this for some time. We understand we have been caused or having been described as causing this violence. We know that’s not the case. And now, before they ignored it, it became DHS’s problem. And now they are saying that it is the administration and of the course the president that is now causing this. So, again, all these statements are absurd. They’re not true. I think most reasonable Americans understand what’s going on out there. And really the cause of all of this is local officials, state officials not taking this seriously enough from day one. When there is violence in your community, you need to restore law and order right away. We’ve seen that. It will work. We’ve seen it Kenosha, after several days, it’s working. Places like Portland and other places need to take the same advice. They need to bring that law and order back to their streets. So that the residents of those cities can feel safe as they go about their business everyday.

Carlson: Yeah. I think that’s exactly right. In the meantime, do you think the Department of Homeland Security is getting the help it needs from the Justice Department? Why haven’t we seen the leaders of Antifa and BLM arrested and charged with conspiracy under RICO like the heads of the mafia families were?

Wolf: Well, this is something that I have talked to the AG personally about. I know that they are working on it. Look, we have seen about 300 arrests across this country regarding civil unrest and protesting, violent protesting and I would say, criminal protesting. Criminal rioting occur. About 300 arrests. About a third of those, or a hundred of those arrests have been in Portland specifically. I know the Department of Justice has charged about 74, 75 individuals there in Portland with different federal crimes. We will continue to see how those investigations are going. Department of Justice is also targeting and investigating the head of these organizations, the individuals that are paying for these individuals to move across the country. What we know, Tucker, is that we have seen groups and individuals move from Portland to other parts of the country. We had about about 175 arrests in Kenosha, almost 100 of them were from out of state. So, we know they are moving around. We have seen them in D.C., in Sacramento, and elsewhere. They are organized. We have seen similar tactics being used from Portland and other cities across the country as well. So, we know that there is organization, I know the Department of Justice is also looking at that as well.

Carlson: You are not allowed to fund crime. Of course. If I do business with Iran, I go to jail, but we have domestic terrorism on a greater scale than we have had in my lifetime – 50 years – and the funders of this have not been exposed by the federal government and they haven’t been punished and I’m confused as to why.

Wolf: Again, I would say that the Department of Justice, who has the lead in all those investigations, are certainly moving as quickly as possible. Again, it is something that I have talked with the attorney general about, almost on a weekly basis. The Department of Homeland Security, we are doing our role. We are making sure that the investigations that we are involved in, we are getting that information over to the Department of Justice, to the FBI, to those criminal investigators that are doing their job. Like you, Tucker, I wish that was in a little quicker fashion, we will continue to see how that is. But again, this administration, this president is committed to holding individuals accountable. I think once folks start to realize that if you want to riot, you want to loot, you want to do some of these other criminal acts that we see around this country, there’s going to be consequences for that and we’re going to continue to move down that road.