Who was the proud owner of that limo the leftists torched on Inauguration day?

The anti-Trump protesters who torched a limousine in downtown D.C. on Inauguration Day may have thought the destructive act was righteous – sticking it to the man. 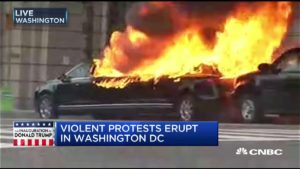 The limo, however, was owned by a Muslim immigrant who now says the damage could cost his company $70,000, along with hospital expenses incurred by the limo’s driver who was injured in the leftists’ rampage.

Muhammad Ashraf, the owner of Nationwide Chauffeur Services, said in an exclusive interview with Red Alert Politics that he wasn’t a supporter of Donald Trump during his campaign, but the Jan. 20 protests were completely counter-productive.

“I have a different point of view,” Ashraf told Red Alert, the sister publication of the Washington Examiner. “I did not agree with many of the things he said, but that still does not give me the right to go and affect someone’s livelihood.”

Ashraf said the limo driver, Luis Villarroel, was dropping a client off at their destination when protesters smashed doors and windows in the vicinity, then turned their attention to Villarroel and the limo.

Protesters pounded on the car and threw stones and bricks in the driver’s direction. Villarroel ended up going to the hospital for cuts on his hands and arms from glass being shattered by thrown projectiles.

“[We’ve] been in business for over 25 years and this is the first time this has happened,” Ashraf said. “I really don’t think we need to take this [violent] route.”

Muhammad Ashraf, Nationwide Chauffeur Services, Trump inauguration, Who was the proud owner of that limo the leftists torched on Inauguration day?, WorldTribune.com