Who says there’s no U.S. voting fraud? Let’s start by defining it 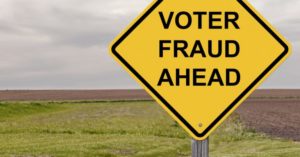 A variety of state election officials have stated that there is no voting fraud in their states. While the media reaction is consistent with their intense dislike of the President, the issues raised are legitimate.

We do not know if President Trump’s charges are correct nor is there currently any way to evaluate the allegations. And that is the problem in a nutshell! Since we do not have sufficient means to judge the issue, President Trump is absolutely correct in asking for an investigation.

The major problem in understanding voting fraud is that most observers do not understand what voting fraud is. There are at least six separate and different facets of voting fraud that must be evaluated to obtain a complete picture of the potential danger:

[“Are we supposed to be so naive as to think that tens of millions of people are here, present in the United States, and none of them are illegally voting?” asked Judicial Watch President Tom Fitton in a statement.

“In states where you don’t have voter ID, in states with the most voter registration, you’re not required to certify citizenship, other than signing and saying you’re a citizen,” he said.

State/local election authorities and other observers can easily state that there is no election fraud. Without addressing all of the above issues, however, these “no fraud” statements cannot be considered as definitive proof that no election fraud exists.

President Trump has made an excellent recommendation.

Dr. Keith Damon is a long-time Republican activist. A former member of the Republican Party of Virginia State Central Committee, he is currently the Elections Committee Chairman for the Fairfax County Republican Committee. Since 2008, Dr. Damon has studied the election laws in Virginia, has monitored and recommended election law legislation, and has worked to combat voting fraud.

Who says there’s no U.S. voting fraud? Let’s start by defining it, WorldTribune.com