Who is Stewart Rhodes, Part II: Why is he still being protected by the Feds?

The case against the first group of Oath Keepers allegedly involved in the breach of the U.S. Capitol on Jan . 6 is expected to go to trial at the beginning of April.

More than 20 members of the group have been indicted in a multi-state conspiracy case alleging they plotted in the weeks leading up to Jan. 6 to disrupt the joint session of Congress. 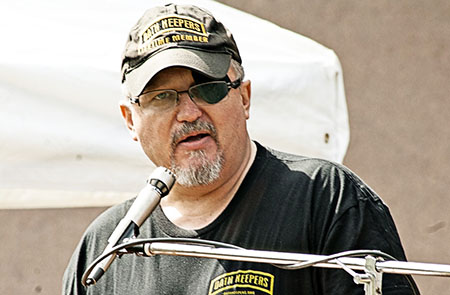 But Stewart Rhodes, founder and kingpin of the Oath Keepers, is not one of those defendants.

Rhodes has not, to date, been charged in connection with Jan. 6 although he allegedly said in a Signal chat an hour before the breach that was obtained by investigators: “All I see Trump doing is complaining. I see no intent by him to do anything. So the patriots are taking it into their own hands. They’ve had enough.”

Prosecutors say they’ve identified footage of Oath Keepers regrouping less than 100 feet from the Capitol building with Rhodes after the “stack” had entered the Capitol.

Carmen Hernandez, a lawyer representing Jan. 6 defendant Donovan Crowl, said it hampers her and other defense attorneys’ ability to plan for trial when they don’t know whether Rhodes is going to be a co-defendant.

“Frankly,” Hernandez told U.S. District Judge Amit P. Mehta during a hearing earlier this month, “I don’t see how any Oath Keepers conspiracy charge can be tried” without Rhodes in the mix.

In a March 8 court filing, the Department of Justice argued that Rhodes “both substantially organized and activated an imputed plan to use violence, on 1/6, in real-time, through a series of encrypted Signal messages beginning at 1:38 p.m., as Trump concluded his rally speech on the National Mall, and 62 minutes before Oath Keepers lieutenants allegedly formed a ‘military stack’ to rush the Capitol doors.”

Revolver News noted in a June report that these facts as the DOJ alleges, “are more than legally sufficient to secure an indictment” against Rhodes.

So why would the feds be protecting Rhodes?

Federal protection of Rhodes “breaks the entire Capitol ‘insurrection’ lie wide open,” the Revolver report said. “If it turns out that Stewart Rhodes has had a relationship with the federal government, the implications would be nothing short of staggering.”

“But readers must understand this: the only reason Stewart Rhodes is not in jail *right now* is because of a deliberate decision by the Justice Department to protect him,” the report added.

Revolver went on to point out: “Irrespective of what happens going forward in terms of indictments, we believe that the evidence provided” in the article “overwhelmingly suggests Rhodes is a federal operative of some kind. The fact that he hasn’t been indicted as of June 30, 2021, in light of additional context” provided in the article, “is the argument.”

Jan. 6, Oath Keepers, Part II: Why is he still being protected by the Feds?, U.S. Capitol, Who is Stewart Rhodes, WorldTribune.com

Who is Stewart Rhodes, Part II: Why is he still being protected by the Feds? added by Editor Two on December 19, 2021
View all posts by Editor Two →