Who is Monica Lee McLean? Kavanaugh accuser’s best friend was an FBI attorney

Monica Lee McLean, who closely assisted Christine Blasey Ford in the critical weeks before her testimony to the Senate Judiciary Committee, was a 24-year employee of the Department of Justice and FBI.

McLean was also one of the signatories of a letter from the Holton-Arms class of 1984 in support of Ford. She also was seen at the Sept. 27 Senate Judiciary Committee hearing at which Ford testified about her sexual assault accusation against Supreme Court nominee Brett Kavanaugh. 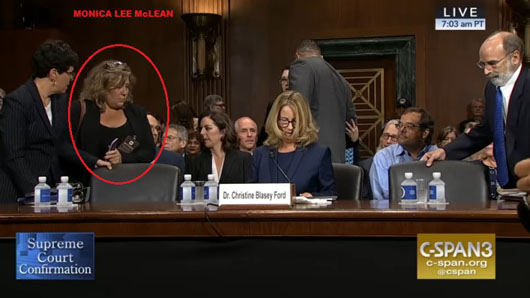 During the Judiciary Committee hearing, when asked how she went about getting legal representation, “Ford essentially responded she didn’t know what to do and had never been in a situation where complex political legal issues were part of her thinking,” The Conservative Treehouse noted in an Oct. 3 report.

“However, her life-long BFF (McLean) was not only a lawyer – she was a career lawyer within the Department of Justice and as legal counsel for the FBI had specific insight into exactly these issues.”

The current address listed for McLean is Rehoboth Beach, Delaware, the report said. Ford testified that she had written the letter to Sen. Dianne Feinstein in which she detailed the accusations against Kavanaugh from Rehoboth Beach.

During the Sept. 27 hearing, Rachel Mitchell, the prosecutor hired by Republicans, asked Ford: “The second is the letter that you wrote to Sen. Feinstein, dated July 30th of this year. Did you write the letter yourself?”

Ford: “I believe so. I – it sounds right. I was in Rehoboth, Delaware, at the time. I could look into my calendar and try to figure that out. It seemed…”

Mitchell: “Was it written on or about that date?”

Ford: “Yes, yes. I traveled, I think, the 26th of July to Rehoboth, Delaware. So that makes sense, because I wrote it from there.”

According to her LinkedIn background, McLean was an employee of the Department of Justice and FBI from 1992 to 2016.  According to public records, McLean worked in both Los Angeles and New York.

“It would appear that Ford was with McLean, the retired FBI agent, at the time she wrote the letter to Sen. Feinstein,” the Conservative Treehouse noted.