Who is Adam Kinzinger, really? The System’s man from the start

He was a Republican congressman using the term “undocumented” way back in 2014:

“We must work hard to come to an agreement on how to bring undocumented workers out of the shadows, legally entering the workforce and becoming part of the American melting pot that makes this country great,” Kinzinger said, adding that securing U.S. borders “must be the first step of the reform process.”

There were no reports of tears being detected as Rep. Adam Kinzinger (R-IL) openly admitted that Republicans like him would first have to deceive their voting base and secure their primary victories before coming out full-force for amnesty for illegal aliens: 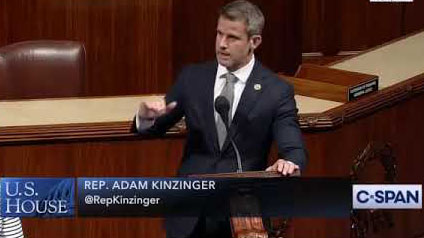 Kinzinger said “a step by step approach” on immigration reform legislation might start coming out of the House after members who don’t want to anger anti-reform voters make it through their primary elections. “The sad thing is, I think we have to get past some of the primaries,” Kinzinger said. “But I think once we do, what we may see out of the House is a border security bill followed by high skill visas.”

That same year, he told establishment-connected CNN host Wolf Blitzer, on whose show he frequently appears, that “I’m a supporter of immigration reform.”

Schock resigned from Congress in 2015 over a spending scandal and later came out as a homosexual despite having represented himself as a family values conservative during his time in office while Hastert admitted to sexually molesting children when he was sentenced to prison in April 2016 for crimes committed while attempting to cover up his predations.

The Illinois Business Immigration Coalition (IBIC), co-host of that 2014 event, is an especially avid corporate public supporter of cheap illegal alien labor. Its steering committee features executives from Exelon, Crate and Barrel and the Illinois Chamber of Commerce.

Martin Slark of highly successful consumer electronics firm Molex is also on the committee. Slark is also a Board Member of Koch Industries and Liberty Mutual Insurance, his LinkedIn page states.

IBIC promotes sensible immigration reform that support the economic recovery of Illinois, provides Illinois companies with both the high-skilled and low-skilled talent they need, and allows the integration of immigrants into our economy as consumers, workers, entrepreneurs and citizens.

IBIC has publicly identified Kinzinger as part of its “mission”:

Thank you to IBIC members & partners for convening yesterday to strategize on our push for commonsense #immigrationreform & to @SenatorDurbin @RepKinzinger @SenatorAquino @repgregharris & @RepChrisWelch for providing important federal & state updates & supporting our mission! pic.twitter.com/Fj9cGkzs0x

IBIC is a member of ABIC, the American Business Immigration Coalition, a national organization advocating for the immigration invasion:

ABIC Co-Chair Bob Worsley, the founder of Skymall and a retired Arizona Republican state senator, said immigration is an “economic prosperity issue” and the “perfect candidate for budget reconciliation.” Other ABIC leaders include current or former leaders of companies such as Crate and Barrel, United Airlines, Bank of America and Greenberg Traurig.

The economic benefits for all Americans that would result from legalizing the status of millions of workers come in the form of increased spending, tax revenues, and job creation. The U.S. economy would grow by $121 billion annually if Dreamers, TPS holders, farmworkers, and undocumented essential workers were to earn legalization and become U.S. citizens, “including multi-billion expansions in a dozen state economies, and boosting federal, state, and local tax revenue by $31 billion annually,” according to a recent analysis.

Hilariously, one of the signatories is Jeb Bush, Jr. This is how ridiculous a man Adam Kinzinger is.

Which brings us back to his early days on the Hill.

It should be clear by now that there is a very good reason for the Swamp’s incessant push of Kinzinger into the limelight. It was evident early for those discerning enough to see.

In 2011, NPR compiled a handy list of GOP “Rising Stars” that included Kinzinger and then-Reps. Kristi Noem (R-SD) and Tim Scott (R-SC) – because NPR really wants to identify and promote the best people for the GOP.

The Kinzinger fluff was particularly embarrassing:

During his years in office, Kinzinger has never wavered in his support for illegal aliens. In 2017, he was one of 34 House Republicans who signed a letter to RINO Speaker Paul Ryan urging protection for Dreamers.

In an official statement from his office in September of that year, he was just as staunch in his commitment:

It’s critical that we act on a permanent, legislative solution that allows these immigrants, individuals who have come out of the shadows and contributed to our society and economy, to stay here legally.”

Adam Kiniznger is living proof of how the right kind of Republican can get ahead in Washington, D.C. Unfortunately for him, he now faces a long-overdue reckoning from voters as a consequence of his Service to the Regime.

Oh well, there are little rewards that await. Either the K Street cash-in or the Jeff Flake RINO trajectory that sees him gifted a shot at network TV news “commentary” and, if that fails, a cushy diplomatic post in an establishment administration.

Adam Kiniznger is going to be just fine. The System must take care of its collaborators in order to assure itself of further useful crops down the line.

really? The System’s man from the start, Who is Adam Kinzinger, WorldTribune.com