In 2019, the World Health Organization (WHO) reported that it had reviewed numerous studies which tested the efficacy of face coverings in stopping the transmission of the flu and found “no evidence that [wearing a mask] is effective in reducing transmission.” [Table 35, page 100] 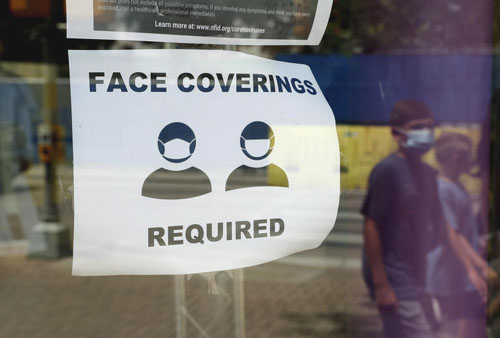 The review was part of a larger study examining “non-pharmaceutical public health measures for mitigating the risk and impact of epidemic and pandemic influenza.”

On its website, currently, the WHO states that it “does not recommend [the] widespread use [of cloth face masks] among the public for control of COVID-19.” Yet in the same paragraph it argues that governments should “encourage the general public to use non-medical fabric masks” in “areas of widespread transmission, with limited capacity for implementing control measures and especially in settings where physical distancing of at least 1 meter is not possible.”

Scientists assert that coronavirus spreads primarily through respiratory droplets from infected individuals. Masks, including cloth face masks, are meant to stop those droplets from spreading to other individuals and to surfaces.

Medical experts say covid spreads the same way as influenza. “Most experts think that flu viruses spread mainly by droplets made when people with flu cough, sneeze or talk,” the Centers for Disease Control and Prevention says on its website.

Many U.S. states mandate that citizens wear masks everywhere in public, “yet many of those same states — such as Michigan, California, and Washington — have seen sustained or increasing infection rates since the mandates went into effect,” Just the News noted in an Oct. 5 report.

In the 2019 review, the WHO reported it examined ten separate randomized, controlled trials which looked into the effectiveness of face masks in stopping flu transmission. There was “no evidence that face masks are effective in reducing transmission of laboratory-confirmed influenza” found in that survey.

According to the WHO’s report, just two of ten the studies found any reduction in the rate of influenza-like illnesses among participants; in one, the reduction occurred over a two-week period during a five-month study, while reductions in another “were not statistically significant.”

The review’s authors note that “the majority of these studies were conducted in households in which at least one person was infected, and exposure levels might be relatively higher.” Therefore, “additional studies of face mask use in the general community would be valuable.”

Though the organization conceded little evidence for the effectiveness of face masks, in an overview of the paper they nevertheless “conditionally” recommend them for the broader public in the case of “severe epidemics or pandemics.”

“Although there is no evidence that this is effective in reducing transmission, there is mechanistic plausibility for the potential effectiveness of this measure,” the overview reads.