The White House slammed House Judiciary Committee chair Jerrold Nadler for releasing only “vague” details about the Dec. 4 impeachment hearing at which a cavalcade of academics, rather than “fact witnesses,” are scheduled to testify.

House Judiciary Committee Democrats on Monday announced their witness list of “academic experts” for the Dec. 4 hearing, which is being billed as a “Constitutional discussion” about the grounds for impeaching President Donald Trump. 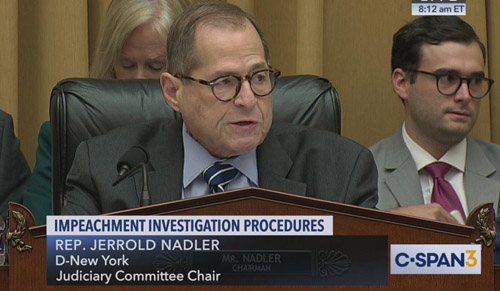 The House Judiciary GOP noted in a Dec. 2 tweet: “The Judiciary Committee won’t hear from fact witnesses this week as House Democrats continue their quest to jam a sham impeachment through the House.”

So, who are these so-called “academic experts”?

Beth Baumann offered up what is known about them in a Dec. 2 report for Townhall.

A law professor at Harvard University, Feldman is also a Bloomberg Opinion columnist. He was a clerk to U.S. Supreme Court Justice David Souter.

“A quick scroll through his Bloomberg columns reveal that he is just as anti-Trump and progressive as we would think,” Baumann wrote.

According to Feldman, Trump’s call with Ukrainian President Volodymyr Zelensky is “an abuse of power.”

A law school professor at Stanford, Karlan also is currently serving as chair of the board of directors for the left-leaning American Constitution Society.

She previously served as U.S. Deputy Assistant Attorney General for Voting Rights in the United States Department of Justice Civil Division during the Obama administration. Karlan also worked for the California Fair Political Practices Commission in the early 2000s to enforce campaign finance, lobbying and conflict of interest laws. After her clerkship she worked as an assistant counsel at the NAACP Legal Defense and Education Fund in the late 1980s.

A law professor at the University of North Carolina School of Law, Gerhardt has previously testified before the House Judiciary Committee. In July he testified about how to handle “presidential misconduct,” specifically relating to the White House defying Congressional subpoenas.

As recently as last month he wrote an opinion piece in The Atlantic, arguing that the impeachment process is “fully legitimate.”

“Gerhardt has even touted how CNN used him as an ‘impeachment expert’ during President Clinton’s Impeachment proceedings and are doing so again with Trump,” Baumann noted.

A George Washington Law School Professor, Turley made headlines in 2014 when he was the lead counsel for then-Speaker John Boehner’s challenge to the Affordable Care Act.

“He also appears to be the most middle-of-the-road of the entire witness list and a true legal scholar,” Baumann noted.

In a recent USA Today column, Turley explained why Democrats are rushing to jam impeachment through and how they’ve failed to prove quid pro quo actually took place.

“If Democrats continue with their plan to impeach Trump by the end of December, they would be presenting the thinnest record and fastest impeachment investigation in history,” Turley wrote.