Who are the real Racists? The ‘Squad’, not Trump, peddles hate

President Trump has nothing to apologize for. His tweets against the “Squad” — Reps. Alexandria Ocasio-Cortez, Ilhan Omar, Rashida Tlaib and Ayanna Pressley — never mentioned their race or skin color. Not once.

In fact, Trump singled out these four progressive Democratic congresswomen for a simple reason: They are radical, anti-American leftists, who increasingly now represent the heart and soul of the Democrats. They are its future. And Trump rightly argued that, if they despise America and its institutions so much, then they are free to go back to the land of their ancestors. 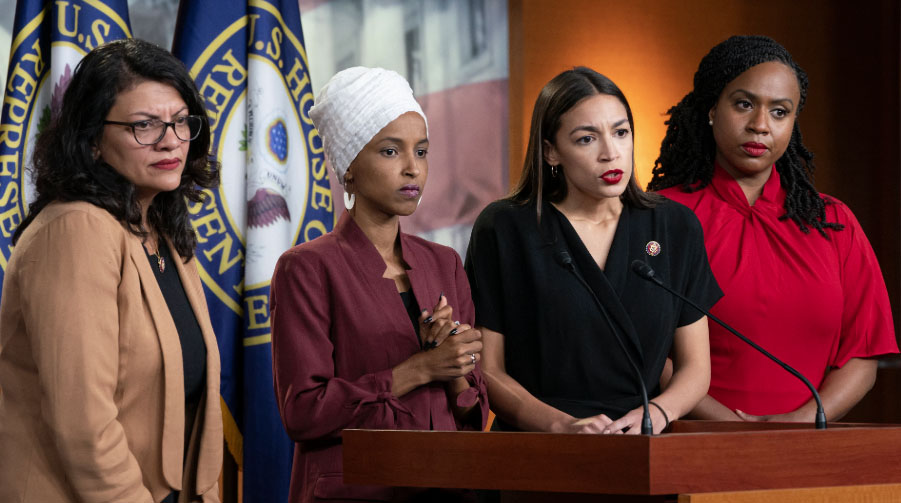 Moreover, Trump in his tweets pointed out that they should “fix” those countries’ problems and then “return” to show us how it’s really done. In other words, these hard-leftists should establish a socialist utopia somewhere else before trying to impose it here.

It wasn’t Trump who injected race, but the Democrats and their media allies.

They turned it into an attack against “congresswomen of color.” Rather than deal with the substance of his argument, the establishment media did what it always does: play the race card in order to label Trump as a bigoted white nationalist.

Trump is simply reviving the famous 1970s slogan, “America, love it or leave it.” Since when did patriotism and love of country become a racist clarion call? The Left is engaging in race baiting and hysteria (again) to bring down Trump’s presidency.

For all their differences, the “Squad” champions one overriding philosophy: The hatred of America. All of them claim the United States is an evil, wicked, racist and unjust nation. They repeatedly lecture us that America was founded upon genocide and slavery, and that it continues to perpetuate an odious, oppressive system based on “white privilege” and economic exploitation.

Hence, if America is so structurally flawed and morally depraved, then these four extreme leftists should simply leave — there must be some other countries that fit the socialist-communist model they believe in.

After all, the U.S. is not a police state; if they are that miserable here, they are free to go. Yet, like most radical progressives, they decry America while generously partaking of its lavish benefits, vast wealth and immense opportunities. They are self-righteous hypocrites. What infuriates the media and the Democrats is that Trump — unlike most Republicans — has the guts to call the “Squad” out.

As AOC put it, America is “garbage.” All four Democrats, however, openly adore several countries: Cuba and Venezuela. They prefer authoritarian socialism and Third World poverty to American democracy and free-market capitalism. Their goal is to transform the United States into a North American Venezuela.

Fidel Castro and Hugo Chavez may be dead, but their Marxist spirits live on. Rather than praising the glories of revolutionary leftism, the “Squad” should try living in one of those Third World hellholes for a year. They wouldn’t last two weeks.

And this is precisely Trump’s point.

Which begs the question: Who is the real racist? The “Squad” belongs to a group called Justice Democrats. Their stated aim is to conduct an ideological and demographic purge of the Democratic Party. They want to primary and defeat every white Democrat. The goal is to create a hard left party composed primarily — if not exclusively — of minorities. In short, they are pushing an openly anti-white, racist agenda.

For example, Pressley defeated long-time Rep. Mike Capuano in last year’s Democratic primary. Capuano was a militant progressive. On policy, there was no difference between them. Capuano was a pro-Green New Deal, pro-LGBT, pro-open borders globalist who championed abortion rights, affirmative action, racial quotas, higher taxes, massive government spending and called for Trump’s impeachment. Pressley’s entire campaign was predicated on one issue: Capuano’s race. She repeatedly said that a majority-minority district needed to have a representative “who looks like them.”

AOC ran a very similar campaign. She blasted 10-term Rep. Joe Crowley not so much for being on the wrong side of the issues (he was a staunch progressive), but for having the wrong skin color. His sin? Like Capuano, he’s white.

There is also the vile anti-Semitism. Omar has said Jews are “evil” and they have “hypnotized” the world. Recently, she claimed Jews run Congress and the United States, using their financial power (“It’s all about the Benjamins”) to impose their control — a classic anti-Semitic libel. Omar has expressed sympathy for Al Qaida and ISIS, going so far as to mock and trivialize the deaths of 3,000 Americans slaughtered during the 9/11 attacks.

Tlaib is a Palestinian-American, who supports Hamas that calls for the destruction of Israel. In her congressional office is a giant Middle East map that shows Palestine as one state occupying all of Israel and the Palestinian territories. She has held fund-raisers with terrorist-aligned Islamist groups. AOC and Pressley not only embrace the anti-Semitic BDS movement. They refuse to condemn Al Qaida or Islamic terrorism.

Only in the Fake News media can four Democratic congresswomen, who espouse an anti-white, anti-Semitic and anti-American ideology, be painted as victims. They are nothing of the kind. Rather, they are racial socialists. And their ominous rise means liberal fascism is on the march. Trump is the only man who stands in their way.

He is right: They should leave before their hate-filled, poisonous politics devours us all. America doesn’t need — or want — them.

Jeff Kuhner, not Trump, peddles hate, Who are the real Racists? The ‘Squad’, WorldTribune.com