Who and what will survive? Bracing for the aftermath of an electoral nuclear war

The neutron bomb “was designed to melt human flesh without damaging infrastructure. Something like it has blown up lots of people in the 2016 election and left behind empty institutions,” Hoover Institution historian Victor Davis Hanson wrote for National Review on Oct. 18. 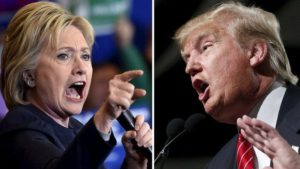 “After the current campaign — the maverick Trump candidacy, the Access Hollywood Trump tape, the FBI scandal, the Freedom of Information Act revelations, the WikiLeaks insider scoops on the Clinton campaign, the hacked e-mails, the fraudulent pay-for-play culture of the Clinton Foundation — the nuked political infrastructure may look the same. But almost everyone involved in the election has been neutroned.”

The D.C. “establishment” and its “elites” ultimately are the biggest losers of 2016, Hanson said.

“Collate the Podesta e-mails. Read Colin Powell’s hacked communications. Review Hillary’s Wall Street speeches and the electronic exchanges between the media, the administration, and the Clinton campaign. The conclusion is an incestuous world of hypocrisy, tsk-tsking condescension, sanitized shake-downs, inside profiteering, snobby high entertainment — and often crimes that would put anyone else in jail.”

The major players “live in a confined coastal cocoon,” Hanson wrote. “They went largely to the same schools, intermarried, traveled back and forth between big government, big banks, big military, big Wall Street, and big media — and sound quite clever without being especially bright, attuned to social justice but without character.

“Their religion is not so much progressivism, as appearing cool and hip and ‘right’ on the issues. In this private world, off the record, Latinos are laughed off as ‘needy’; Catholics are derided as near medieval and in need of progressive tutoring on gay issues.”

Hanson continued: “In this world, there are Bill and Hillary, the Podesta brothers, Huma Abedin and Anthony Weiner, Christiane Amanpour and Jamie Rubin, Samantha Power and Cass Sunstein, Andrea Mitchell and Alan Greenspan, and on and on. Jorge Ramos goes after Trump; his daughter works for Hillary; and his boss at Univision badgers the Clinton campaign to stay lax on open borders — the lifeblood that nourishes his non-English-speaking money machine.

“These nice people report on each other. They praise each other, award each other, make money together, and bristle with each other when they are collectively and pejoratively dubbed the ‘elites.’ They write and sound off about the buffoon Trump and preen in sanctimonious moral outrage, as the rest of the country sees this supposedly lavishly robed imperial class as embarrassingly naked.”

In the debates, the moderators “follow assumed premises: an Anderson Cooper, Candy Crawley, Lester Holt, or Martha Raddatz envision themselves as crusaders hammering away at selfish and dangerous conservatives, in behalf of an ignorant audience that needs their enlightened help to avoid being duped,” Hanson wrote.

“The 2016 campaign is not quite over, and there are a few neutron bombs left to go off — but for many of our accustomed fixtures it is too late. They are nuked, and nothing remains but their shells.”

2016 presidential election, What will be left standing? Bracing for the aftermath of an electoral nuclear war, WorldTribune.com