White House on the defensive after airstrike by U.S. fighters allows ISIL advance

A U.S. airstrike that hit a Syrian army position on Sept. 17 allowed Islamic State of Iraq and Levant (ISIL) to advance on, an ultimately overrun it, the Syrian army said.

The airstrike at Jebel Tharda near Deir Ezzor airport is “conclusive evidence” that the U.S. and its allies support the jihadist group, the Syrian army said in a statement, noting that the strike was “dangerous and blatant aggression.” 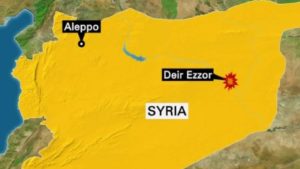 The UK-based Syrian Observatory for Human Rights said 90 Syrian soldiers were killed in the Sept. 17 airstrike, sharply higher than the death toll of 62 given by Moscow.

“We are reaching a really terrifying conclusion for the whole world – that the White House is defending Islamic State. Now there can be no doubts about that,” Russian Foreign Ministry spokeswoman Maria Zakharova said, according to a report by state news agency RIA Novosti.

In December 2015, Syria accused the U.S.-led coalition of striking an army camp near Deir Ezzor, but Washington said it was done by Russian jets.

A strike list issued by the U.S. on Sept. 17 said it had carried out a strike at Deir Ezzor against five ISIL supply routes, as well as strikes near Raqqa and elsewhere in Syria. The Pentagon said that coalition pilots had believed they were hitting ISIL and had halted the raid as soon as Russia informed commanders that army positions were coming under attack.

Syria’s army controls Deir Ezzor airport and parts of the city which are otherwise entirely surrounded by territory held by ISIL.

U.S. ambassador to the United Nations Samantha Power said “if we determine that we did indeed strike Syrian military personnel, that was not our intention. And we of course regret the loss of life.”

The Syrian army on Sept. 18 launched a counterattack on the Deir Ezzor airport.

“The Syrian army has returned to the offensive,” a military source told AFP. “After the American raids, it withdrew from several positions but now it has gone back on the attack.”

The Observatory said at least 30 jihadists were killed in the counterattack by the army.

Meanwhile, the U.S. accused Russia of grandstanding on Sept. 17 by calling a U.N. Security Council meeting over the airstrike that killed the Syrian soldiers.

Power said Russia’s decision to call a council meeting was “cynical and hypocritical” as Moscow had never expressed such outrage at the killing of civilians by Syrian government forces during more than five years of conflict.

“Russia really needs to stop the cheap point scoring and the grandstanding and the stunts and focus on what matters, which is implementation of something we negotiated in good faith with them,” Power told reporters.

Russia said the U.S. strike could endanger a truce deal between Moscow and Washington.

“If what Ambassador Power has done today is any indication of their possible reaction then we are in serious trouble,” Russian U.N. Ambassador Vitaly Churkin said told reporters.