Whistleblowers in Pennsylvania, Michigan and Nevada have stepped forward to declare they have witnessed explicit fraud in the 2020 U.S. election. 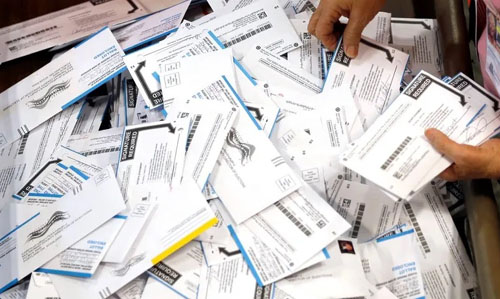 Speaking from Philadelphia, Giuliani said dozens of poll observers will testify to not being able to inspect mail-in ballots.

“Those mail-in ballots could have been for anyone they wrote in,” Giuliani said. “Not a single one was inspected as the law required.”

Giuliani estimated that about 300,000 ballots weren’t inspected in the Pittsburgh area. All together, he said about 700,000 might not have been reviewed, the same amount of votes Trump led by in the Pennsylvania on election night.

Giuliani added that Republican poll watchers were also denied the ability to inspect ballots in Detroit and Atlanta.

Some of the latest reports include:

Richard Hopkins was the second Pennsylvania USPS whistleblower who came forward to Project Veritas to the postmaster ordered late ballots to be picked up and separated to be backdated.

Hopkins signed an affidavit that is now with Lindsey Graham and the Senate Judiciary Committee.

It has also been reported that the chairperson of the Philadelphia City Commissioners who is overseeing the 2020 election had lost her notary license in Pennsylvania in 2018 for failing to verify signatures.

Lisa Deeley, who in a press conference updated the nation on the vote count in Philadelphia, “permanently surrendered” her notary license in 2018 for approving signatures on legal documents without asking for identification as required by state law, the American Report noted.

According to the Philadelphia City Commissioners Twitter account, Deeley serves on the “three member bipartisan board of elected officials in charge of elections and voter registration for @PhiladelphiaGov.”

In Detroit, two observers who were at the TCF Center during the absentee ballot counting process have produced affidavits claiming they witnessed workers create new voter files with information obtained from ballots, Breitbart News reported.

Bob Cushman, who was an appointed and trained Republican poll challenge, wrote in an affidavit:

“I observed that none of the names on these new ballots were on the QVF or the Supplemental Sheets. I saw the computer operators at several counting boards manually adding the names and addresses of these thousands of ballots to the QVF system.

“When I asked what the possible justification was to counting ballots from unknown, unverified ‘persons’, I was told by election supervisors that the Wayne County Clerk’s Office had ‘checked them out’.

“I challenged not one ballet, but the entire process as the names were not in the Poll Books or Supplemental Sheets and because the DOB’s were all wrong, all being marked as 01-01-1900.

“Every ballot was being fraudulently and manually entered into the Electronic Poll Book (QVF), as having been born on January 1, 1900. This ‘last’ batch of ballots was processed in the 8 PM to 10 PM time frame.

“When I asked about this impossibility of each ballot having the same birthday occurring in 1900, I was told that was the instruction that came down from the Wayne County Clerk’s office.”

Breitbart’s report noted that Lori Levin, a non-partisan challenger, witnessed similar behavior by workers. According to her affidavit: “The person opening ballots was in the middle of this table and when she would scan the ballot it would not come up in the electronic poll book. I then insisted they had to be in the paper pollbook and I needed to verify. She would hover entirely over the paper pollbook with her body and sometimes check a name and other times not check a name but refused to let me see this. They would then manually enter the name and often a birthdate of 01/01/1900.”

A whistleblower swore an affidavit claiming to have been instructed to count ballots needing signature verification that lacked the requisite signatures to be eligible.

John Roberts reported for Fox News that the election worker, whose job was to process mail-in ballots, says he witnessed irregularities in counting those ballots and was told by a supervisor to put through ballots he believed needed signature verification without that verification first being done.

The election worker says he was also told to ignore discrepancies with addresses. He has sworn out an affidavit which has been sent to the Department of Justice here in Washington. A Trump campaign attorney said: “The affidavit makes clear that we’re not dealing with oversights or sloppiness. This was intentional criminal conduct.”

“The fact remains that hundreds of thousands of ballots have been counted in Clark County and as a judge and the secretary of state have confirmed we have not been allowed to observe or challenge a single signature match for these votes. With the issues that have been reported regarding the election, we are now more than ever concerned with the lack of the transparency in observing and challenging possible invalid ballots,” said Trump campaign co-chair Adam Laxalt.

A Georgia county is reportedly re-scanning ballots after discovering a reporting issue.

According to Georgia Secretary of State Brad Raffensperger, a monitor and investigators were on-site at State Farm Arena in Fulton County on Saturday.

“Fulton has discovered an issue involving reporting from their work on Fri. Officials are at State Farm Arena to rescan that work. I have a monitor & investigators onsite. Also sent Dep. SOS as well to oversee the process to make sure to secure the vote and protect all legal votes,” Raffensperger tweeted.

In a statement to news outlets, Fulton County said its elections director, Richard Barron, directed his staff to review provisional ballot counts “to ensure that all provisional ballots were reflected in the results.”

“In doing so he learned that some ballots were not captured in last night’s results,” the Saturday statement added. “He also learned of a smaller number that were not scanned. Those are now being prepared for scanning.”

Joe Biden held a 9,160-vote lead in Georgia as of 11:13 p.m. on Nov. 7. Raffensperger had previously said that the state is headed for a recount due to the slim margin.

Meanwhile, attorney Sidney Powell told host Maria Bartiromo on Sunday Morning Futures that “there has been a massive and coordinated effort to steal this election from We The People of the United States of America to delegitimize and destroy votes for Donald Trump. To manufacture votes for Joe Biden.”

Powell added: “They’ve done it in every way imaginable, from having dead people vote in record numbers, to absolutely fraudulently creating ballots that exist only for voting for Biden. We’ve identified over 450,000 ballots that miraculously only have a vote for Joe Biden on them and no other candidate. They also used an algorithm to calculate the number of votes they would need to flip. And they used computers to flip those votes from Trump to Biden and from other Republican candidates to their competitors also.”