It’s safe to say that, with the possible exception of the ongoing disaster that has been Vice President Kamala Harris, no other potential 2024 presidential candidate has done more to damage their chances in 2021 than South Dakota Republican Gov. Kristi Noem. 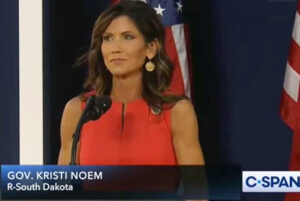 In March, she came off as a coward who valued corporate appeasement over principle. Now she has added the label of tone-deaf politico who cannot grasp that Americans are terrified at the prospect of losing their jobs due to coronavirus vaccine mandates handed down by authoritarian employers.

Noem catastrophically shot herself in the foot, leg and hip earlier this year when she used a style and form veto to effectively kill a bill that had passed the South Dakota state legislature that would have protected female athletes from being forced to compete with biological males.

The move was immediately seen for what it was by angry grassroots Republicans across the nation: a flagrant capitulation to pressure from corporate heavyweights Amazon and the NCAA, both of whom have threatened economic boycotts against states that do not toe the pro-transgender line.

To a good number of conservatives, many of whom had counted themselves as supporters of the small-state governor who had been seen as a rising star in the GOP party ranks, the climb down killed her 2024 ambitions right then and there. If so, then her latest self-inflicted mistake has her furiously shoveling dirt on her own coffin.

Noem tweeted out this clunky economic message on July 31:

Workers whose employers are mandating a vaccine for continued employment have the power to say no. Our robust economy and job market gives them the option to find a new employer that values personal choice and responsibility, and doesn’t force mandates on their employees.

Talk about not being able to read the room.

Vaccine coercion is widely seen among Republicans, and many unaligned voters as well, as a dire civil rights threat. Opposing mandatory vaccines, be they imposed by government or private entities, is a natural rallying point for citizens justly alarmed by the ongoing loss of personal liberty in this nation since the coronavirus scare first took root in March 2020.

Florida Gov. Ron DeSantis has seen his stock soar in GOP ranks precisely because he has stood against this encroaching tyranny. “It’s completely unacceptable for either the government or the private sector to impose upon you the requirement that you show proof of vaccine to just simply be able to participate in normal society,” DeSantis said shortly before issuing an April 2 executive order banning vaccine passports in the Sunshine State. The Florida Legislature one month later passed a bill that DeSantis signed making the order established law.

For Noem, however, this assault on the individual rights of regular Americans was merely an opportunity to roll out antiquated pre-Trump Era Republican-lite bumper sticker lingo about the alleged glories of an unregulated economy.

For you see, telling a company they can’t force workers to get a jab would be a regulation. And so the myth must be trotted out that there is a myriad of choices available to the employee who will be forced out of his current job in the spirit of non-regulation due to the marvels of that very same unregulated economy.

This is Bush-era economics and it has all the appeal in the populist Republican Party of 2021 as that family’s leading lights do today. Then again, as WorldTribune reported in March, Kristi Noem has always fit in more with the old-school RINO ranks than with the America First GOP championed by Donald Trump.

In 2019, Noem took part in a pro-China forum held in Las Vegas co-hosted by The China Federation of Industrial Economics, a communist state-run outfit. China made abundant propaganda use of the gathering afterwards.

These sentiments were welcomed by Xiong Meng, Executive Vice Chairman, China Federation of Industrial Economics, China, who reiterated that China would welcome a new stability – new ventures could blossom for US entrepreneurs across many Chinese sectors from Fin-tech through to investing in enterprises along the hubs of the Belt and Road initiative of President Xi Jinping.

As we also noted, Noem:

Noem’s vaccine passport misfire has an importance that goes far beyond her personal ambitions. The severe blowback she has received from the Republican ranks highlights the tall task the GOP establishment will have in trying to get a “conventional” Swamp politician to be the party’s 2024 nominee.

Noem has convincingly shown that the tired old GOP-lite schtick is not going to fly in an America in which an artificially imposed Biden administration is actively waging war against this country’s citizens. The next Republican presidential candidate must present him or herself as a stalwart defender of the rights of individual Americans rather than just another poorly concealed servant of corporate donor interests.