In an op-ed for National Review, blogger Fred Bauer described what “cancel culture” is and does:

” ‘Cancel culture’ is in part about enforcing a set of cultural values (an enterprise not unique to that movement), and it often does so through social-media pressure, which is sometimes aided and abetted by major media institutions. So, for instance, a hubbub starts on Twitter, which CNN then magnifies. It would be naïve to read this as digital democracy; often, major media institutions give a megaphone only to those social-media controversies that they find helpful for their preferred predetermined narrative. For instance, after Halle Bailey was announced as Ariel in a live-action remake of The Little Mermaid, major media outlets focused on a few random tweets in order to portray America as a whole as a seething cauldron of racial animosity. Though social media are an important vector for cancel culture, they are often a vehicle rather than a cause.”

Bauer continued: “Cancel culture includes other technological elements, too. Perhaps one of its more distinctive elements is that it occurs during a moment of near-universal legibility. Earlier efforts at ostracism often occurred within discrete localities or subcultures. For Internet-based cancel culture, anyone anywhere can launch an attack on anyone anywhere. Moreover, these attacks are available for all to see over an indefinite period of time. As Helen Andrews has noted, one of the core elements of modern shaming is its endurance. A video clip, a private text message, a Facebook post — anything can be transformed into a cause for public, personal ridicule, which the amber of the Internet preserves across years or even decades. Nor is cancel culture simply about criticizing others on social media. Instead, it is often about translating this digital criticism into real personal pain: to cause jobs to be lost, college admissions to be revoked, and media platforms to be shut down. (There’s a reason why it’s called cancel culture and not criticism culture.)”

One of the latest targets of the leftist “cancel culture” mob is blogger, author and WorldTribune.com columnist Michelle Malkin.

Malkin, author of Open Borders Inc.: Who’s Funding America’s Destruction?, was scheduled to speak in November at the annual ACT for America banquet at Mar-a-Lago in Florida.

Gateway Pundit noted that ACT for America “is a pro-American group who’s mission is to educate, engage, train, and mobilize citizens to ensure the safety and security of Americans against all threats foreign and domestic while preserving civil liberties guaranteed by the U.S. Constitution.”

Once the news was out that Malkin would appear at the event, the “cancel culture” mob went into overdrive. The leftist Southern Poverty Law Center (SPLC) and Anti-Defamation League (ADL), who claim ACT for America is an “anti-Muslim group,” pressured Mar-a-Lago to cancel the event.

The New York Times reported: “ACT for America claims to be the nation’s largest grass-roots national security organization, and is considered the largest anti-Muslim group in the United States, according to the Anti-Defamation League and the Southern Poverty Law Center, which tracks such groups. Michelle Malkin, a conservative columnist, author and television commentator, will be the keynote speaker, according to an invitation that was posted on the organization’s website. A day after news reports appeared about the gala, the invitation was removed from the website and a spokeswoman for the Trump Organization said in an email, without elaboration, ‘This event will absolutely not be taking place at Mar-a-Lago.’ ”

Malkin fired off a series of tweets on Oct. 7 slamming the decision and “cancel culture”:

“THREAD: Statement: I am disappointed at the cancellation of my 11/7 speech at @ACTforAmerica ‘s annual banquet, but I will not be deterred. There is a chilling “cancel culture” campaign being waged against patriotic journalists & activists — /1

“– and apparently, not even Mar A Lago is a safe space. Here’s the real problem: The @splcenter & @CAIRNational seek to silence & eliminate political opponents by redefining criticism of their agenda & tactics as “hate.” /2

“These character assassins exploit sympathetic & lazy journalists, like those at the @MiamiHerald Herald who targeted @ACTforAmerica @ACTBrigitte & me after receiving an SPLC alert over the weekend about our event. The smear merchants thrive on fear. /3

“Mindless dissemination of false & defamatory labels must end, & I will do everything in my power to stop it–just as many of my friends & allies suing SPLC & CAIR have. I am a lover, not a hater, of my country. /4”

Another egregious example of “cancel culture” was highlighted by Fox News host Tucker Carlson during his Sept. 25 broadcast.

Carson King is a 24-year-old Iowa resident who raised over $1 million for University of Iowa Stead Children’s Hospital after he jokingly held up a sign asking for beer money which caught the attention of ESPN’s “College Gameday” audience.

After his story went viral, King appeared on Fox News to describe the incredible outpouring of support for his charitable effort. Soon after he appeared on Fox News, which for so many leftists is akin to attending a Nazi rally, “cancel culture” engulfed Carson King.

Carlson blasted the Des Moines Register reporter who “decided to basically wreck this kid’s life” by “digging for an excuse to destroy King.” The reporter, Aaron Calvin, wrote that the tweets were uncovered via a “routine background check.” (Some observers wondered whether the Des Moines Register does “routine” background checks going back 8 years on all subjects of its reporting. Or just those that appear on Fox News? Or its own reporters for that matter.) 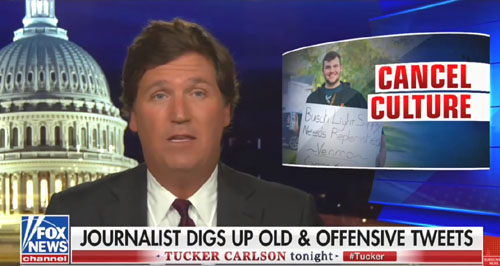 While King’s tweets “contain racially offensive humor,” Carlson noted, they also occurred while King was in high school and were quotes from a Comedy Central show that is still on the air. Still, “the Des Moines Register decided that this kid had to be destroyed, so they dispatched a reporter called Aaron Calvin, and he published a profile of King that highlighted the two ancient tweets. Then he went to Anheuser-Busch to tattle on King.”

While Anheuser-Busch promptly dropped “all association with Carson King,” it also ironically is a “major advertiser on Comedy Central,” Carlson said.

“So, in other words, this huge company is happy to crush you for quoting products they fund the creation of,” said Carlson. “If that doesn’t make your head spin, then nothing will.”

After pointing out that the Des Moines Register reporter quickly ended up with his own kind of karma (Calvin published multiple tweets between 2010 and 2013 making fun of black people, joking about abusing women and mocking homosexuals, The Washington Post reported), Carlson blasted the concept of cancel culture.

“Nobody should have their reputation wrecked for dumb jokes made a decade or whatever ago. Cancel culture is a national plague, and the only people it helps are bullies who use powerful platforms to defame and crush those they dislike, often with the help of major multinational corporations. Thankfully, some people are starting to realize that. More than 100,000 have signed a petition calling for The Des Moines Register to apologize to Carson King, and hopefully they will immediately. You should drop your subscription to that paper immediately if they don’t, for real.”