What if the FBI put on an insurrection and nobody came?

The Federal Bureau of Investigation is disappointed by the low attendance at the D.C. rally they organized for Trump supporters Satuday. 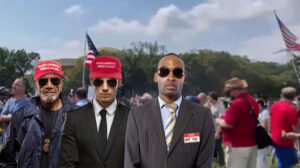 “Ivermectin! Get your hot, fresh Ivermectin HEEEERRRRE!” cried one agent selling bootleg Ivermectin tablets from Tractor Supply Company. Unfortunately, he only made a couple of sales to a few other FBI agents from other field offices he didn’t recognize.

“Greetings, fellow Trump supporters,” said another agent. “Let’s go insurrect the government, shall we, fellas? Maybe kidnap Gretchen Whitmer? Whadaya say boys? Say—I sure do love racism!” He was then immediately tackled by three other FBI agents who dragged him to an unmarked van.

What if the FBI put on an insurrection and nobody came?