American Airlines canceled more than 1,500 flights between Friday and Sunday, including 12 percent of its total operations for the day on Sunday. 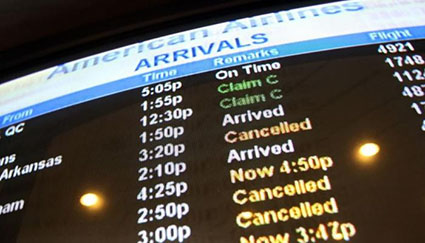 The Texas-based airliner, which mandated that its employees by fully vaccinated against Covid by Nov. 24 or be terminated, blamed the cancellations on “weather issues and staffing shortages,” reports said.

“While we are still working through the details of the federal requirements, it is clear that team members who choose to remain unvaccinated will not be able to work at American Airlines,” Doug Parker, American Airlines chief executive, said in a memorandum on Oct. 1.

According to the Allied Pilots Association, which represents American pilots, 4,200 – of the airline’s pilots, or 30 percent, have not gotten the Covid jab.

The head of the pilots association warned the White House and Congress last month that mandates could trigger chaos in the near future.

In addition to the weekend cancellations from American, the airline delayed hundreds of flights between Friday and Sunday, according to the tracking site FlightAware.

In a letter to employees obtained by The Epoch Times, American’s Chief Operating Officer David Seymour blamed “severe winds” in the Dallas-Fort Worth area with creating the situation.

Earlier this month, Southwest Airlines was forced to cancel thousands of flights after pilots boycotted the airline’s vaccine mandate. The cancellations cost Southwest a reported $75 million.

Meanwhile, an Associated Press “reporter” was triggered after a Southwest Airlines pilot on her flight finished an announcement to passengers with “Let’s Go, Brandon.”

“On Friday morning on a Southwest flight from Houston to Albuquerque, the pilot signed off his greeting over the public address system with the phrase, to audible gasps from some passengers,” Long wrote.

Long claimed in a Twitter thread that she was almost removed from the aircraft after unsuccessfully trying to get the pilot to comment for her story.

‘Weather’? American Airlines cancels over 1,500 flights as pilots balk at vaccine added by Editor Two on October 31, 2021
View all posts by Editor Two →