‘We will soon have no choice’: Clarence Thomas warns Big Tech over censorship

Supreme Court Justice Clarence Thomas, in a statement from a recent court opinion, appeared to warn Big Tech companies that their rights to censor what they declare objectionable speech might soon be curtailed.

“Today’s digital platforms provide avenues for historically unprecedented amounts of speech, including speech by government actors. Also unprecedented, however, is control of so much speech in the hands of a few private parties,” Thomas said. 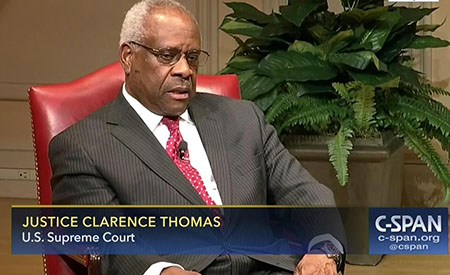 “We will soon have no choice but to address how our legal doctrines apply to highly concentrated, privately owned information infrastructure such as digital platforms.”

The statement from Thomas came in a 12-page concurrent opinion on a Supreme Court decision that considered whether former President Donald Trump had acted unconstitutionally when he banned several people from following his now-defunct Twitter account.

That lawsuit was ruled moot because Trump had been permanently banned.

Thomas commented that the argument from the plaintiffs were undermined by the fact that Trump’s social media accounts were later suspended by numerous social media platforms.

Thomas said the Trump case didn’t allow the court to fully address the issue of whether social media companies should be afforded legal protection by the government outlined in Section 230 of the Communications Decency Act.

“When a user does not already know exactly where to find something on the Internet — and users rarely do — Google is the gatekeeper between that user and the speech of others 90% of the time. It can suppress content by deindexing or down listing a search result or by steering users away from certain content by manually altering autocomplete results,” Thomas wrote.

Facebook and Twitter, Thomas added, “can greatly narrow a person’s information flow through similar means. It changes nothing that these platforms are not the sole means for distributing speech or information. A person always could choose to avoid the toll bridge or train and instead swim the Charles River or hike the Oregon Trail. But in assessing whether a company exercises substantial market power, what matters is whether the alternatives are comparable. For many of today’s digital platforms, nothing is.”

Thomas also noted that if the Big Tech platforms were treated like “common carriers” or public utilities such as telephone companies, instead of private companies, laws could be passed to prevent Twitter, Facebook, Google, and Amazon from excluding users or content they dislike.