While the policy of “engagement” with China incorporated by past administrations was leading to utter failure, Beijing was focusing on becoming a military and economic power that would become a major threat to the United States, a leading reporter on China and its military said. 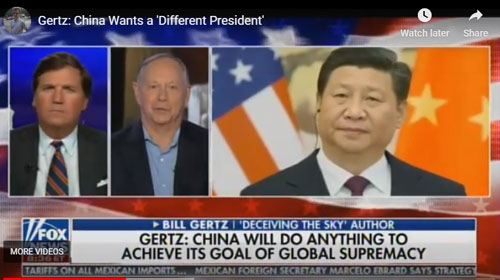 “It’s going to take all of America’s will, policy focus, and effort to mitigate that threat,” Washington Free Beacon senior editor Bill Gertz told Fox News host Tucker Carlson on Sept. 6. “We are in real trouble. China is on the march.”

Gertz notes in his new book, Deceiving the Sky: Inside Communist China’s Drive for Global Supremacy, that China is working to stop the re-election of U.S. President Donald Trump en route to becoming the world’s dominant military force.

“They are already working in the farm states,” Gertz told Carlson. “They are working against the whiskey industry in the United States to undermine Trump. They want a different president.”

Gertz is a veteran security correspondent for The Washington Times. He contends that Democratic presidential candidates are wrong to say climate change is the greatest “existential threat” to the United States when China “is fast accumulating more military and economic power.”

Chinese supreme leader Xi Jinping, Gertz said, “has shifted the old policy of Deng Xiaoping, which was ‘bide our time, build our capabilities.’ They are now out front. He has something called the China Dream, which is really a Chinese communist nightmare. They are doing this Belt and Road Initiative, which is a cover for military and economic expansionism around the world.”

The U.S. policy of “engagement” to open China up and turn it into a “benign, free-market, open system” was a gamble that has “utterly failed,” Gertz said, pointing to Chinese theft of nuclear secrets following increased military cooperation with the United States during the Bill Clinton administration.

“They ended up stealing nuclear secrets on every deployed U.S. warhead. That technology was then spread to Pakistan, Iran, North Korea, and other places,” Gertz said. “We helped their missiles and now their missiles are aimed at our cities. They have an array of long-range, short-range, and intermediate-range missiles. This is a real problem.”