The Washington Post made worldwide news and was lampooned at home for an online obituary which framed Abu Bakr al-Baghdadi, the leader of the brutal Islamic State (ISIS) terrorist organization, as an “austere religious scholar.” 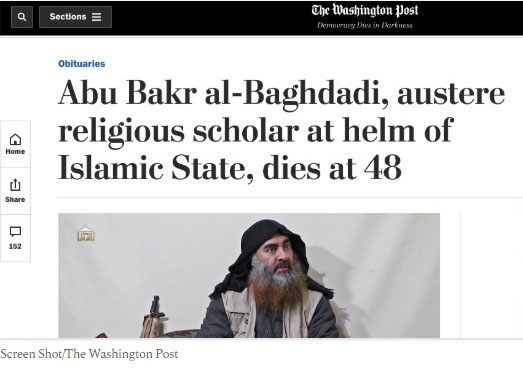 Reports had begun circulating late Saturday that a U.S. Special Forces raid in northern Syria had resulted in the death of al-Baghdadi. President Donald Trump confirmed those reports in a Sunday morning announcement from the White House.

After critics slammed the Post, with Fox News’s Brit Hume tweeting that the Jeff Bezos-owned media outlet “has become unembarrass-able”, the headline was changed to read, “Abu Bakr al-Baghdadi, extremist leader of Islamic State, dies at 48”.

The opening paragraphs of the obituary listed al-Baghdadi’s “achievements”.

“When Abu Bakr al-Baghdadi took the reins of the Islamic State of Iraq in 2010, few had heard of the organization or its new leader, an austere religious scholar with wire-frame glasses and no known aptitude for fighting and killing.

But just four years later, Mr. Baghdadi had helped transform his failing movement into one of the most notorious and successful terrorist groups of modern times. Under his guidance it would burst into the public consciousness as the Islamic State, an organization that would seize control of entire cities in Iraq and Syria and become a byword for shocking brutality.”

A spokesperson for the Post said: “Regarding our al-Baghdadi obituary, the headline should never have read that way and we changed it quickly.”

But the widespread mocking had already begun as Twitter users took aim with their own obit submissions for the Post:

“Mao Zedong, who saved 20-45 million of his own people from having to suffer through the struggle of existence, dies at 82”

“Emperor Palpatine, austere holder of emergency powers and advocate for democracy, died after a fall.”

House Minority Whip Steve Scalise tweeted: “Every day The Washington Post uses harsher words against @realDonaldTrump than they do in writing about one of the world’s most evil terrorists. Yet we’re supposed to take them at face value. Let that sink in.”

Counselor to the president Kellyanne Conway simply tweeted: “No excuse.”