Was 2020 vote really the ‘most secure’ ever? Election integrity top midterm issue for voters

Evidence continues to pile up that refutes the insistence of Big Media, the Democrat Party, and assorted anti-Trumpers and RINOs that the 2020 election was in the words of the former head of the Cybersecurity and Infrastructure Security Agency Chris Krebs, the “most secure in American history”. 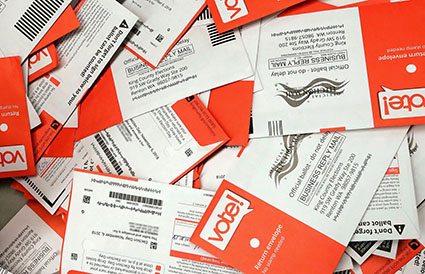 Georgia Secretary of State Brad Raffensperger, who long claimed he was confident the state carried out a clean 2020 vote, “now admits the state’s largest county ran a vote counting operation so dysfunctional that the state may take over the county,” John Solomon reported for Just the News on March 10.

Arizona, one of the first to move to no-excuse mail-in voting, “has now begun an urgent effort to return to traditional in-person voting with paper ballots after investigations called into question more than 50,000 ballots cast in November 2020 and tens of thousands more verification signatures,” Solomon noted.

Meanwhile, a new Rasmussen Reports poll shows that voters consider election integrity a key issue, with 83 percent saying it will be a factor in the 2022 midterm elections for House and Senate and the 2024 presidential election..

1. Foreign Inteference. Federal authorities have confirmed that two Iranian nationals successfully hacked into a state computer election system, stole 100,000 voter registrations and used the data to carry out a cyber-intimidation campaign that targeted GOP members of Congress, Trump campaign officials and Democratic voters in the November 2020 election in one of the largest foreign intrusions in U.S. election history.

3. Illegal ballot harvesting in Wisconsin. An extensive vote collection operation, known as ballot harvesting, was carried out in nursing homes in which third-party activists illegally collected the ballots of vulnerable residents, some of whom lacked the mental or physical capacity to vote or were forbidden from voting by guardianship agreements.

4. Ballot harvesting probe in the Peach State. Raffensperger has announced he has opened a criminal investigation into allegations that liberal activists engaged in illegal ballot harvesting, collecting ballots from voters and delivering them in violation of state law.

5. Bad voter signatures? A review of Maricopa County’s mail-in ballots in Arizona’s 2020 presidential election estimated that more than 200,000 ballots with signatures that did not match voter files were counted without being reviewed, more than eight times the number the county acknowledged.

6. 50,000 Arizona ballots called into question. An extensive audit by Arizona’s Senate officially called into question more than 50,000 ballots cast in the 2020 election, including voters who cast ballots from residences they had left. The tally in question is nearly five times the margin of Joe Biden’s victory in the state.

7. Illegal ballot drop boxes. A Wisconsin judge has ruled the widespread use of ballot drop boxes in 2020 was unlawful, and the state Supreme Court let that ruling stand. That means drop boxes can’t be used in future elections starting in April. It also means that tens of thousands of ballots in the 2020 election were cast unlawfully.

8. Foreign voters found on Texas rolls. An audit of Texas voter rolls identified nearly 12,000 noncitizens suspected of illegally registering to vote and nearly 600 cases in which ballots may have been cast in the name of a dead resident or by a voter who may also have voted in another state. Officials are now in the process of removing the foreign voters and deciding whether prosecutions are warranted.

9. Foreign voters found on Georgia rolls. An audit by Georgia’s Secretary of State has identified more than 2,000 suspected foreigners who tried to register to vote in the state, though none reached the point of casting ballots.

11. More noncitizen voters. The Gableman investigation in Wisconsin also found noncitizens had made it onto the state voters rolls in violation of state law.

12. Ballot chain of custody issues. The Georgia Secretary of State’s office has opened an investigation into the handling of drop box ballots last November in one of the state’s Democratic strongholds following a media report that there were problems with chain of custody documentation in DeKalb County.

16. Illegal exemptions from voter ID. The Wisconsin Supreme Court ruled as many as 200,000 voters were allowed to illegally skip voter ID for absentee ballots by claiming they were indefinitely confined by Covid when there was no such legal authority to do so.

20. Still more nursing home fraud. In Wisconsin, Racine County Sheriff Christopher Schmaling announced his investigators have secured evidence that eight out of 42 residents at a local nursing home had been recorded as casting absentee ballots that their families said was not possible because the residents didn’t possess the cognitive ability to vote.

In the same poll, 75% of Republicans believed “cheating” changed the outcome of the 2020 election.

Rasmussen also found that on one key election reform issue, voter identification, support remains high. Overall, 74% of likely voters said that voter ID should be required, including 90% of Republicans and 59% of Democrats.

And despite complaints from some Democrats, including the president, that reforms like ID requirements are racist, even majorities of minorities don’t think so. The Rasmussen analysis added, “While some have claimed voter ID laws discriminate against racial minorities, majorities of every racial group — 76% of whites, 60% of black voters, and 78% of other minorities — agree that requiring photo ID to vote is a reasonable measure to protect the integrity of elections.”

Was 2020 vote really the ‘most secure’ ever? Election integrity top midterm issue for voters added by Editor Two on March 10, 2022
View all posts by Editor Two →