This Wabbit Season, Elmer Fudd will be using a massive scythe and loads of dynamite to hunt Bugs Bunny. 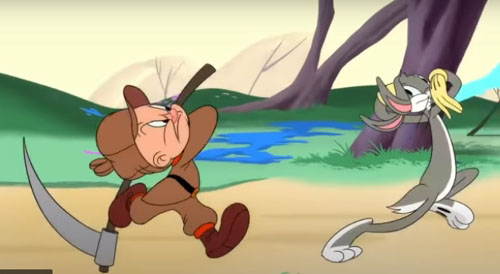 But “Looney Tunes” has taken away Elmer’s shotgun.

Because everyone knows that slicing and dicing or blowing to bits Wascally Wabbits is much more humane than shooting them?

Series executive producer Peter Browngardt told The New York Times, “we’re not doing guns. But we can do cartoony violence — TNT, the Acme stuff. All of that was kind of grandfathered in.”

“And that is precisely why I think westies are kinda pathetic. I like a lot of westie stuff but this “OMG mass shootings OMG we better not have guns in media” hypersensitive pixel peril paranoia needs to die in a grease fire”.

“The bigger issue that you even point out yourself is that you felt the need to censor and change the art in order to accommodate liberal butt hurt as well as be politically correct. That act is a political/cultural statement and people are rightfully calling you out for it.”

Michael Ruocco, who’s worked on shows like Bojack Horseman, blasted the critics, tweeting: “Also, think about context about what’s going on in the world, and how long ago our show started production. Late 2017, early 2018. Right on the heels of a record number of mass shootings, particularly the horrific one in Las Vegas. NOBODY wanted to touch guns working in media.”

A Twitter user responded: “Funny how we didn’t have this record number in mass shootings back in the mid-1900s when Looney Tunes had guns all the time. It’s almost as if cartoons aren’t the problem.”

Another tweeted: “CONTEXT! Is not an argument. Don’t make the show then. Do something else. Make a new IP. No, you can’t, you have to hang on to the coat-tails of established IP and try to mold it to your own vision of it. That’s why people hate it.”

“Looney Toons Cartoons” debuted with HBO Max this month and is available to stream.