Donald Trump was able to break through the Democrats’ “blue wall” in the Midwest by standing up for working class Americans against well-funded climate change alarmists, an analyst said.

“The biggest loser on election night was the Big Green movement in America dedicated to the anti-prosperity proposition that to save the planet from extinction we have deindustrialize the U.S. and throw millions and millions of our fellow citizens out of their jobs,” Stephen Moore, a senior fellow at the Heritage Foundation, wrote in a Jan. 1 analysis. 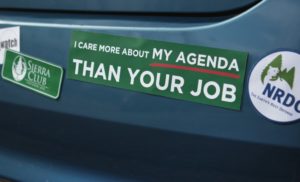 The executive director of the Sierra Club called Trump’s victory “deeply disturbing for the nation and the planet.”

Moore opined that, if Trump is that detrimental to the environment, “why did he win?”

“The short answer is that Americans went to the polls and rejected environmental extremism among other things. Voters turned thumbs down on the climate change lobby and rightly so.”

The Sierra Club was overjoyed last year “when it helped push several of America’s leading coal production companies into bankruptcy. Sierra Club spokeswoman, Lena Moffit, took credit for destroying coal production in America, but she neglected to mention the tens of thousands of miners, truckers, construction workers, and other blue collar workers who lost their jobs due to the Sierra Club campaign. What humanitarians these people are.”

Moore continued: “Moffit promised that the Sierra Club will ‘bring the same expertise that we brought to taking down the coal industry and coal-fired power in this country to taking on gas in the same way to ensure that we’re moving to a 100% clean energy future.’ ”

An estimated 10 million Americans are directly or indirectly employed by the oil and gas and coal industries and, Moore wondered, the left is intent on putting “every one of these people out of a job?”

“And by the way, someone might want to inform these self-proclaimed scientific geniuses that natural gas is clean energy,” Moore wrote.

“Fortunately, we learned on election day that voters aren’t as alarmed as the alarmists are. Almost none of the voters that I met in Ohio, Pennsylvania, Wisconsin, Indiana, or Michigan had anything but contempt for the climate change fanatics. They view this as another attempt by Washington to run their lives and completely ignore their economic plight in favor of grandiose dreams of the government somehow changing the weather.”

Another surprise in an election year full of surprises was that Democrats “were surprised by the mass voter rejection of the radical climate change agenda,” Moore wrote.

“Every poll for the last five years at least has shown that climate change barely registers as a leading concern of American voters. A 2015 Fox News poll found that only 3 percent of Americans believed that climate change was ‘the most important issue facing America today.’ That means 97 percent disagreed with Barack Obama, Hillary Clinton, Bernard Sanders and Tom Steyer that global warming was the greatest threat to America. This didn’t stop Hillary Clinton from telling West Virginians that she would put every coal miner out of a job. Then she wonders why she got crushed in this unionized historically reliable Democratic state.”

Moore continued: “The issue that now confronts Democrats is whether they can reconnect with blue collar union voters by disassociating themselves from the fanatical greens that are trying to destroy union blue collar jobs. It won’t be easy. Environmental groups are said to be raising record hauls of cash from their millionaire and billionaire donors since the election. Ultra-green environmentalists like Tom Steyer may call the party’s tunes, but then don’t be surprised when millions of blue collar middle-class workers flee to the Republicans.

“Something has to give in the Democratic Party. My prediction is that Democrats will only make a comeback in American politics when they throw crazies like Tom Steyer, the Sierra Club, and Greenpeace off the bus and start listening to the everyday concerns of working-class Americans again.”