A ballot measure in November will ask North Carolina voters to decide if the state constitution should be amended to require photo ID for in-person voting. 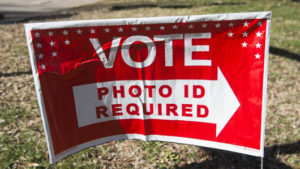 Republican lawmakers, who approved the ballot initiative over Democrats’ protests, say the photo ID requirement is necessary to prevent voter fraud and to bring North Carolina in line with 34 others states that have the requirement.

Mississippi and Missouri are the only states in which the photo ID requirement is in their state constitutions.

“We want to make sure that everyone who is eligible to vote is able to cast their vote once, and that those votes cumulatively determine who wins and loses our elections,” Republican state Rep. David Lewis said during debate on the bill, which the state Senate gave final approval of on June 29. “We want extraordinary turnout, because participation is key to confidence in, and legitimacy of, our elections.”

North Carolina Democrats “said it would prevent elderly people and African-Americans from voting. Republicans said it would curb voter impersonation that is hard to catch,” the Raleigh News & Observer reported.

A panel of federal judges struck down North Carolina’s voter ID law in 2016, saying it had targeted African-American voters with “almost surgical precision.”

Gerry Cohen, who served as counsel to the North Carolina Legislature for nearly four decades, said the amendment to the state constitution is an attempt by Republicans to block the Democratic-controlled state Supreme Court from striking down any voter ID requirement.

“If it passes, it will basically immunize voter ID, specifically photo voter ID, from any challenge under state constitutional grounds,” Cohen said, according to the Huffington Post.