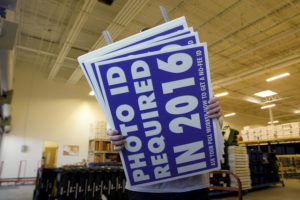 “Changing our state’s election laws close to the upcoming election, including commonsense voter ID, will create confusion for voters and poll workers,” McCrory said. “The [appellate] court should have stayed their ruling, which is legally flawed, factually wrong, and disparaging to our state.”

Kozak noted that “North Carolina is the sixth state to have its voter ID laws struck down by black-robed radicals.”

In July, Kansas was ordered to amend its law to allow for more types of identification. Also in July, the 5th Circuit Court of Appeals decided Texas’ voter ID law was discriminatory, and the Ohio legislature’s decision to end a provision which allowed for early voter registration and early voting was struck down when a court deemed it placed an undue burden on African-Americans.

“Wisconsin’s voter ID law, which faced a series of legal challenges since its passing in 2011, was also struck down in July 2016. A federal judge issued an injunction against the law and voters in Wisconsin will not have to prove they are who they claim to be this November. A North Dakota voting ID provision was struck down by a federal judge in August,” Kozak wrote.

“Voter ID laws like the six that were struck down this summer are almost always challenged on the grounds that they place ‘undue burdens’ on non-white people. Liberal and Democratic opposition to such laws is allegedly based on the notion that they are intentionally designed to disenfranchise non-whites by racists using voter fraud as a red herring.

“Aside from the fact that there is something inherently racist and explicitly patronizing about this line of reasoning that suggests blacks — or in North Dakota’s case, Native Americans — are incapable of obtaining legally valid forms of ID, there is no actual evidence voter ID laws create such burdens.”

Kozak noted, however, that there is “ample evidence” that voter fraud is a regular occurrence in American elections.

In a 2014 Washington Post expose by Jesse Richman and David Earnest titled “Could non-citizens decide the November election?” the answer was an emphatic yes.

“James O’Keefe, the conservative filmmaker best known for exposing fraudulent activity at ACORN in a series of undercover videos, has also revealed the clear existence of voter fraud in the U.S. In New Hampshire he found it possible to vote using the identity of a dead person, while in North Carolina he filmed Democratic operatives encouraging his associates — who were posing as non-citizens — to vote,” Kozak wrote.

“In Michigan, which requires only that voters fill out an affidavit affirming their proclaimed identities, O’Keefe found that such affidavits were almost never checked. He was able to pose successfully as the mayor of Detroit, the dean of Wayne State University Law School, a Detroit Free Press columnist and — no, this is not The Onion — Marshall Mathers aka Eminem.”