Federal agents, including unmarked vehicles and a helicopter, were deployed to a recent local school board meeting in Virginia, a Fairfax County mother of six told Fox News.

Four days before the federal show of force, Stacy Langton said she was one of about 45 parents who on Oct. 17 protested outside of the Department of Justice. She said that she did not believe the federal presence at the school board meeting was a coincidence. 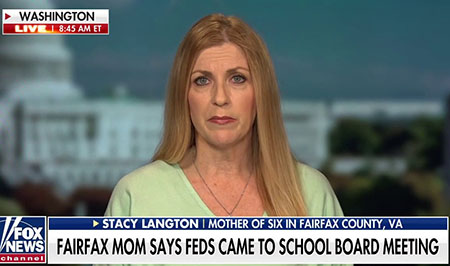 “This is something that is incredible in America and it’s ridiculously un-American,” Langton told “Fox & Friends.”

Langton shared a photo on Twitter of a Department of Homeland Security vehicle as well as several “ghost cars,” which she said could have been either unmarked local or federal vehicles. In addition, Langton said a helicopter flew overhead, shining its spotlight down on the school board meeting venue.

Embattled Attorney General Merrick Garland insisted during a House Judiciary Committee on Oct. 21 that the FBI would not be present at school board meetings.

But Langton said that, Since attending the DOJ protest, she has been receiving daily threats from unidentified sources. She told Fox News the threats are also a result of her public statements criticizing her children’s school curriculum, which she said included the distribution of pornographic materials to students.

“I have threats against my children by name, I have been followed in my car with my children, they have my vehicle, they know where I live, and I don’t know who’s putting somebody up to this, but it’s obviously meant to intimidate me,” said Langton.

Langton specifically called out Garland: “I’m not getting a lot of sleep right now, nobody’s sleeping in my house because we can’t be sure that we’re safe. So, I understand Merrick Garland is actually testifying today at the Senate and he’s gonna talk about mobilizing the FBI against parents. Maybe he should mobilize the FBI into who’s threatening my family.”

Meanwhile, Republicans on the House Judiciary Committee have launched an investigation into what they say is “collusion” between the Biden administration and the National School Boards Association ahead of the DOJ’s decision to intervene in school board meetings.

In a letter to NSBA officials, the Republicans asked for their communications with the White House, FBI and Justice Department related to the organization’s Sept. 29 letter to Joe Biden calling for federal assistance and comparing threats against school officials to “domestic terrorism and hate crimes.”

The NSBA board of directors issued an apology last week to its state affiliates for the letter, after Garland’s Oct. 4 directive bringing in the FBI to address “a disturbing spike in harassment, intimidation and threats of violence” against school officials.

“We are investigating the troubling attempts by the Department of Justice and the White House to use the heavy hand of federal law enforcement to target concerned parents at local school board meetings and chill their protected First Amendment activity,” said the 19 House Judiciary Republicans in the letter obtained by The Washington Times.

The Republicans cited internal emails posted by Parents Defending Education in which NSBA President Viola Garcia and interim Executive Director Chip Slaven said their staff had been in discussions with the White House about the letter before it was sent.

“The Biden administration seemingly relied upon the NSBA letter — which it coordinated in advance with the NSBA — as justification to unleash the full weight of the federal law enforcement apparatus upon America’s parents,” said the Republican letter, led by Rep. Jim Jordan of Ohio, the top Republican on the committee.

The GOP letter also asked “whether the NSBA will urge Attorney General Garland to withdraw or rescind his October 4 memorandum.”

“Concerned parents are absolutely not domestic terrorists and, to the extent actual threats exist, local law enforcement — and not the FBI — are the appropriate authorities to address those situations,” said the GOP letter. “Parents cannot tolerate this collusion between the NSBA and the Biden administration to construct a justification for invoking federal law enforcement to intimidate and silence parents using their constitutional rights to advocate for their child’s future.”

Garland refused to retract the memo under questioning Wednesday by the Senate Judiciary Committee, saying it came “in response to concerns about violence, threats of violence, other criminal conduct — that’s all it’s about.”