Excerpted from analysis by GIS/Defense & Foreign Affairs in Roseau and Washington, D.C. , Geostrategy-Direct.com

It was unsurprising that the Dec. 6, 2019, general election in the Caribbean state of Dominica appeared to have garnered little attention in a Washington, DC, obsessed with impeachment hearings designed to bring down a president, or in London (given that Dominica is a Commonwealth state), faced with its own pivotal election on Dec. 12. 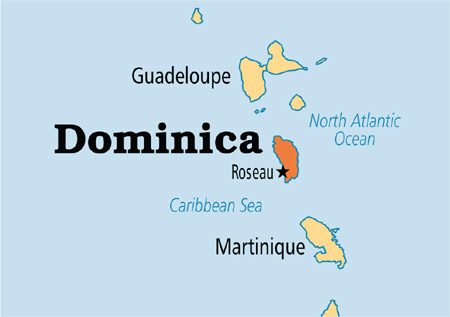 But the election in Dominica is critical, because Dominica — population 72,000 — has been the spearhead of much of the People’s Republic of China’s strategic operations in the Caribbean Basin.

From this base, the PRC has engineered its support for Venezuelan President Nicolás Maduro (even though his administration has lost much international recognition), Cuba, Bolivia, and elsewhere, and has been used as a major base for intelligence and political operations against the US and elsewhere in the Americas.

Prime Minister Roosevelt Skerrit has also worked diligently with the PRC to support Iranian covert activities to circumvent U.S. embargoes. It is worth bearing in mind that the UK, Dominica’s principal strategic partner in the Commonwealth, has no High Commission in Dominica; neither does the U.S. have an embassy.

The U.S. was, until Skerrit came to office, the main security partner of Dominica.

The Chinese Embassy, outside the main capital, Roseau, is, however, disproportionately large, and clearly a base for regional operations, particularly by the Ministry of State Security (MSS), Beijing’s national-level intelligence service, conducted away from scrutiny.

The result of the PRC’s engagement has been, over the 15 years Prime Minister Roosevelt Skerrit (Dominica Labor Party) has been in office, that Dominica has become the hub of a large network of illegal activities which have funded the effective suppression of anything like democracy on the island.

It is for this reason that many foreign political observers and some Dominicans have said that the opposition United Workers Party/Team Dominica (conservative) movement should boycott the Dec. 6 election as a protest to the advance steps Skerrit, 47, and his team have undertaken to ensure that, regardless of voter intention, he would win a fourth consecutive term in office. After all, the opposition had unsuccessfully taken its protests against vote rigging to the courts in past elections which Skerrit has claimed victory. Why should it expect the 2019 elections to be different?

Why participate in the charade? After all, the Skerrit Government absolutely rejected the combined report of Joint CARICOM (Caribbean Community), Commonwealth, OAS (Organization of American States) Task Force mission to Dominica, Aug. 6-9, urging electoral reform and political dialog before any future election.

Indeed, it is probable that Skerrit called the Dec. 6 election specifically to head off any requirement to institute reforms which would guarantee a transparent, free and fair election.

This time, however, the electoral mood is different. Opposition elements in early November requested a meeting with President Charles Savarin to discuss the election. The president would not, however, meet with the opposition or civic groups, resulting in protestors setting up roadblocks — set on fire — to stop traffic from entering the capital, Roseau.