Members of the UNC Board of Governors are thinking a conservative-leaning center at the University of North Carolina at Chapel Hill would restore intellectual balance to the state’s college campuses.

“We are trying to address a problem that seems to be endemic in higher education all across the United States in that the universities seem to be moving toward a mono-culture,” board member Joe Knott said. “There’s a lack of diversity in viewpoint, intellectual viewpoint.” 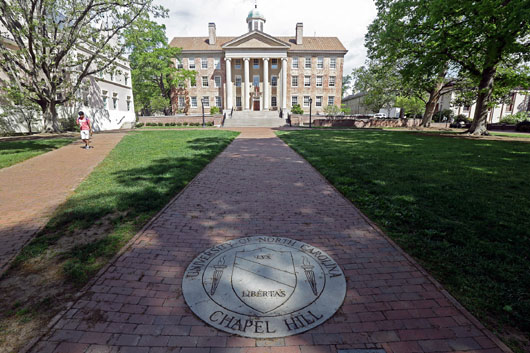 The UNC board recently visited Princeton University to examine a conservative-leaning center – the James Madison Program in American Ideals and Institutions.

On its website, the Princeton center, founded by Robert “Robby” George, encourages students to “Think for yourself.”

“In today’s climate, it’s all-too-easy to allow your views and outlook to be shaped by dominant opinion on your campus or in the broader academic culture,” said a letter signed by George and 27 other professors at Harvard, Princeton and Yale. “The danger any student – or faculty member – faces today is falling into the vice of conformism, yielding to groupthink.”

Gabriel Lugo, a UNC-Wilmington math professor and chairman of the UNC system’s Faculty Assembly, told the Raleigh News & Observer that if the center were to interfere with the faculty’s prerogative to set curriculum, “that would be like inserting themselves into a hornet’s nest” and the faculty would be “jumping up and down to oppose it.”

George, who has been outspoken in opposition to gay marriage and abortion, was called by The New York Times “the country’s most influential conservative Christian thinker” and the “reigning brain of the Christian right.”

George is the author or co-author of several books, including “In Defense of Natural Law,” “Making Men Moral: Civil Liberties and Public Morality,” and “What is Marriage? Man and Woman: A Defense” and “Embryo: A Defense of Human Life.”

UNC President Margaret Spellings pointed to a Pew Research Center poll that showed 58 percent of Republicans and Republican-leaning independents say colleges and universities have a negative effect on the way things are going in the country.

People see footage of campus protests with speakers being “brutalized and assaulted and spit on,” Spellings told the News & Observers, adding, “they think, ‘What the hell is going on over there?’ ”

“Have we created environments where people with all points of view can be heard and respected?” Spellings asked. “Obviously this is kind of a major issue of our time, how we talk to each other.”

The UNC center would go a long way toward addressing that issue, Knott said: “Of course it would be a wonderful thing if you’re a liberal student, rather than going to Yale and having everybody agree with you, you could come to Carolina and get a very fine liberal education but you would be challenged at every point by the best conservative scholars in the country.

“Likewise, if you’re a conservative, you wouldn’t go to Hillsdale College, necessarily, where everybody would agree with you. But you’d come to Carolina where every point would be challenged by the existing faculty but you could be supported by the new conservative faculty.

“If we could figure out how to do that,” Knott concluded, “it would absolutely change the face of American higher education.”