A resolution by state Rep. Tim Ramthun to reclaim Wisconsin’s 10 electors for U.S. President and Vice President in the 2020 election, due to certification under fraudulent circumstances, received a unanimous vote to advance in the state’s assembly Tuesday evening. 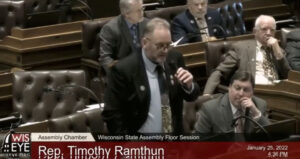 The resolution now moves forward to the Wisconsin Rules Committee and Wisconsin Senate for immediate confirmation as Bill 743.

During an open session today Rep. Ramthun asked that the resolution be privileged and passed on the the Rules Committees. The responses to privilege the resolution and advance the it to the committee were both unanimous.

“I’m a legislator, and I want you to hear this because that’s what the constituents are asking me to do,” Ramthun is reported to have said, according to The Gateway Pundit.

Speaker Robin Vos, a Republican and the longest serving speaker in Wisconsin’s history, and the rest of the representatives now have ten days to answer back on whether Vos will to push the resolution to the floor for a vote.

This is the first time Wisconsin’s history that a state representative has moved to reclaim the state’s 10 electoral ballots.