In a unanimous decision on Monday, the Supreme Court ruled that a Christian group can fly its flag on Boston city property. 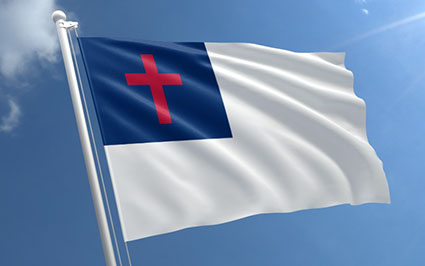 The high court’s ruling states that the city isn’t endorsing religious speech by allowing the group, Camp Constitution, to display the flag which includes a Latin cross.

Boston said that no religious flags had been flown on city property in the past. The city, however, has flown “gay pride” flags.

Justice Brett Kavanaugh wrote that Boston was in violation of the Constitution’s Establishment Clause in treating secular groups differently than religious groups by flying some flags but not religious ones.

“Under the Constitution, a government may not treat religious persons, religious organizations, or religious speech as second-class,” Kavanaugh wrote.

Justice Stephen Breyer wrote: “When a government does not speak for itself, it may not exclude speech based on ‘religious viewpoint.’ Doing so ‘constitutes impermissible viewpoint discrimination.’ ”

Boston’s government has granted permission for private groups to celebrate events and fly flags on City Hall’s flagpoles, which constitutes a public forum.

Lower courts had ruled for the city, but the Supreme Court on Monday reversed the lower courts’ rulings.

Camp Constitution had first applied to fly a Christian flag in celebration of Constitution Day and Citizenship Day in 2017.

Boston denied the application, the first time it had done so since 2005 after reviewing 284 requests.

Unanimous Supreme Court rules Christian flag can fly on city’s property added by Editor Two on May 2, 2022
View all posts by Editor Two →