Uh oh. Liberal Jewish Democrats realize Obama is not the One

The Democrats have a Jewish problem, and his name is Barack Obama. Reluctantly, many Jews, loyal Democrats by birth and tradition, have concluded that he’s not The One they thought he was.

With even greater reluctance, the White House has concluded that their Jewish problem is real, growing, and they better do something about it.

Mitt Romney’s dramatic declaration Sunday in Jerusalem that preventing Iran from building a nuclear weapon is America’s “highest national security priority” and military force should not be excluded, and that he regards Jerusalem as the true capital of Israel, puts in stark relief the difference between what the two candidates think about America’s only real ally in the Middle East. 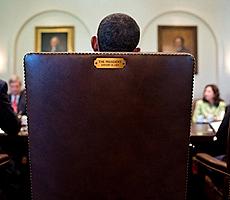 Mr. Romney is willing, even eager, to give heartfelt, emphatic, unadulterated, full-throated support for the Jewish state in its hour of greatest peril since the founding. Mr. Obama can’t do that because he doesn’t “feel the love.” He sprang from a culture of radicalism where Israel was regarded as illegitimate, if not evil. He gives the clear impression that he doesn’t like Jews very much.

Mr. Obama repeats only empty, bland assurances that everything is OK, that the friends of Israel shouldn’t worry because the messiah from Chicago is on the watch. U.S.-Israeli ties, he told a rally the other day in Palm Beach, are stronger than ever. That’s bunk, as Sen. John McCain bluntly told a television interviewer: “Everybody knows that relations with Israel have never been worse.”

Bland assurances are no longer enough to satisfy betrayed true believers; the monolithic Jewish support for Democrats, any Democrat, is fraying around the edges. Merely telling skeptical and suspicious Jewish voters not to believe their own eyes and ears is no longer effective. No one expects Mitt Romney to win a majority of Jewish voters on Nov. 6, or anything close to it. He doesn’t have to. If he can peel away three or four percentage points in certain swing states, particularly Florida and Ohio, that would change the game.

John McCain spent a lot of time, attention and money to attempt this four years ago. George W. Bush made such an attempt in 2004. Neither worked. But 2012 is a different ball game.

Jewish voters, like others of various passions and persuasions, have had four years to confront buyer’s remorse. Four years of Barack Obama have taught even slow learners to pay attention.

The proof is that a group of the slow learners, Jewish liberals still in love with Mr. Obama even if he isn’t in love with them, are putting together a campaign to answer the Republican Jewish Coalition’s successful work to get the friends of Israel to wake up and sniff the odor of harsh reality. This is not, a Democratic operative told Politico, the Capitol Hill daily, a case of Obama being “swift boated.” Nobody is telling stories about the president. His Jewish critics are merely laying out what everybody who has been half-awake during the past four years already knows.

Aaron David Miller, who has worked for several Democratic presidents over a quarter of a century, warns Democrats of “turbulence ahead” in a commentary in Foreign Policy magazine that has shaken up Jewish assumptions. “I’ve watched a few presidents come and go on this issue,” he writes, “and Obama really is different. Unlike [Bill] Clinton and George W. Bush, Obama isn’t in love with the idea of Israel. He has a harder time making allowances for Israeli behavior he doesn’t like. . . the president doesn’t emote on many policy issues, with the possible exception of health care. But on Israel, he just doesn’t buy the ‘tiny state living on the knife’s edge with the dark past’ argument.”

Alas, the knife’s edge is exactly where Israel lives, like it or not, and Israel must act accordingly. Mitt Romney, like his constituents – some Jewish, most not, and many of them evangelical Christians – understands that. Mr. Romney, like that constituency, is not embarrassed to “emote” about it. Barack Obama can’t “emote” because to him Israel is not a natural friend and ally, bound to America by considerations of blood, faith and circumstance, but a nuisance. Why can’t Israel just go away?

This is hard for Jews, who have been voting Democratic since their grandfathers rallied to FDR and the New Deal, to accept as the new reality. It has been easier to pretend there’s no problem. But now there is a problem, and it’s too big to hide with convenient pretense.