A billboard in downtown Phoenix which depicts President Donald Trump as a Nazi was paid for with taxpayer dollars and will remain standing as long as he is in the White House.

According to records obtained by Judicial Watch, the billboard was commissioned by longtime patron of the arts Beatrice Moore and created on the taxpayers’ dime by artist Karen Fiorito. 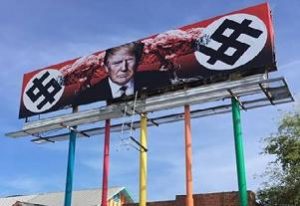 The billboard features a menacing portrait of Trump surrounded by mushroom clouds – in the shape of laughing clowns – and swastikas modified as dollar signs. A pin of a Russian flag appears on the president’s lapel.

In an interview with The Washington Post, Fiorito called Trump supporters “scumbags” and she said the country is on a “very dangerous path” toward “total annihilation.” The dollar swastikas represent “corporate power and greed and how our society has become all about money and corporatism,” she said.

The Phoenix art gallery that claims to own it did not disclose that public money was involved in creating the billboard, Judicial Watch said. The gallery said the billboard would remain in place for the duration of Trump’s presidency.

Judicial Watch received documents that show the city of Phoenix has awarded Moore thousands of dollars in grants for a program she runs called Grand Avenue Arts & Preservation (GAP), which encompasses the Art Detour event where the Nazi billboard made its debut in March.

The publicly funded Art Detour event is touted as having “a diverse slate of activities created by local artists and art venues to celebrate the growing, vibrant Phoenix arts scene” and is described as “…one of the most important events in Phoenix’s calendar” by Phoenix Mayor Greg Stanton. The event is produced by a group called Artlink, which was founded by Moore, in partnership with the city of Phoenix.

In August 2016 Artlink was awarded $1,800 for the 2017 Art Detour event, according to the records. Moore, who contracted Fiorito to create the anti-Trump billboard, is recognized by the city as an “artist, community organizer and arts advocate” and the annual festival she puts together with public money aims to “diminish barriers,” the records say.

Funds come from “government grant monies,” including the Arizona Commission on the Arts, and the money is used for “artists’ fees.”