U.S. State Department scraps plan to charge Americans $2,000 to fly out of Afghanistan

After being slammed for what seemed an over-the-top move of callousness, the U.S. State Department said it was scrapping a plan to bill U.S. citizens $2,000 or more for their evacuation flights from Kabul airport. 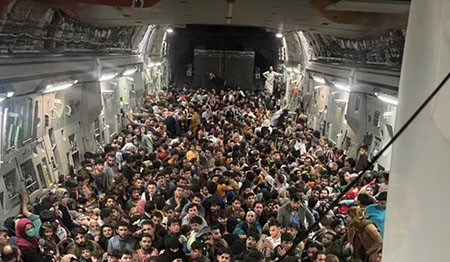 “In these unique circumstances, we have no intention of seeking any reimbursement from those fleeing Afghanistan,” State Department spokesman Ned Price said in a statement provided to the New York Post.

The plan to charge American evacuating Afghanistan had been publicly posted to a State Department website on Saturday but went largely unnoticed before it was highlighted by reports on social media.

An unnamed State Department spokesman initially stood by the charge, telling Politico that “U.S. law requires that evacuation assistance to private U.S. citizens or third country nationals be provided ‘on a reimbursable basis to the maximum extent practicable.’ ”

The Washington Examiner’s Jerry Dunleavy tweeted: “State Dept’s Overseas Security Advisory Council said Aug. 14: ‘Repatriation flights are not free, & passengers will be required to sign a promissory loan agreement & may not be eligible to renew their U.S. passports til the loan is repaid. Cost may be $2,000 or more per person.’ ”

“Biden created this crisis, now he wants to charge Americans who are desperately fleeing the Taliban? That’s wrong,” Tenney tweeted. “We should not be making Americans pay for their ride to safety. I’m drafting legislation now to PROHIBIT the U.S. government from charging Americans, period.”

The American embassy in Kabul announced on Wednesday that it “cannot guarantee safe passage” for Americans traveling to the city’s airport. Defense Secretary Lloyd Austin said Wednesday that the military doesn’t have the capability to rescue Americans that can’t make their way to the airport, and the State Department acknowledged Thursday that there have been reports of Taliban forces blocking American citizens from reaching the airfield.