The United States considered but turned down requests from European Union members for wholesale exemptions on Iran sanctions that President Donald Trump said in May would be re-imposed after the U.S. withdrew from the nuclear deal. 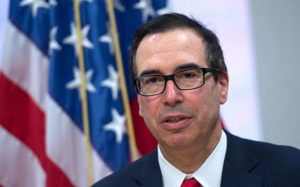 In order to avoid disrupting global oil markets, the U.S. will consider waivers for countries which need more time to wind down their oil imports from Iran, Treasury Secretary Steven Mnuchin said.

“We want people to reduce oil purchases to zero, but in certain cases if people can’t do that overnight, we’ll consider exceptions,” Mnuchin said.

Mnuchin and Secretary of State Mike Pompeo wrote in a letter to EU members that the U.S. intended to maintain sanctions on Iran until it saw a “tangible, demonstrable and sustained shift in the policies we have enumerated,” officials told NBC News.

“We will seek to provide unprecedented financial pressure on the Iranian regime,” they added, noting that they were “not in a position to make exceptions to this policy except in very specific circumstances where it clearly benefits our national security” but would make exceptions for humanitarian purposes.

Ministers from Germany, France, Britain and the EU governing body had requested exemptions for businesses in finance, energy and healthcare.

The Trump administration has said there are more than 50 foreign companies that have withdrawn their business from Iran since Trump announced the U.S. was withdrawing from the 2015 nuclear deal between Iran and the U.S., Germany, France, Britain, China and Russia.