The crew of a U.S. destroyer has seized 2,500 AK -47 rifles and other weapons from a vessel off the coast of Yemen. 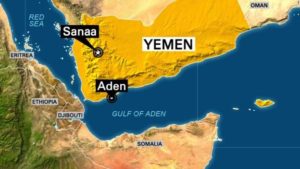 U.S. authorities on Oct. 25 said they invited UN inspectors to determine whether the weapons provide proof that Iran is smuggling arms to Houthi rebels in Yemen. Iran has denied providing weapons to the Houthis.

U.S. Ambassador the UN Nikki Haley has repeatedly accused Iran of supplying the Houthis. Last year, she displayed the remnants of missiles that the Houthi rebels fired at Saudi Arabia, which is backing the Yemeni government in the civil war, saying they provided “undeniable evidence” that Iran was illegally supplying weapons to its Houthi allies.

Vice Admiral Scott Stearney, commander of the U.S. 5th Fleet, said the Gulf of Aden and other waterways around Yemen are “one big traffic corridor” for weapons shipments.

The USS Jason Dunham seized a large weapons cache in the region in late August.

In the August incident, the Dunham’s crew reported it observed large bags being transferred from a dhow about 70 miles off the coast of Yemen into a smaller skiff. The Navy ship intercepted the skiff and, after talking to the crew on board, determined they were smuggling weapons, Radio Free Europe/Radio Liberty (RFE/RL) reported.

The weapons, in bundles of four or five, were wrapped in plastic, then wrapped in styrofoam and hidden in green burlap bags, according to Navy Commander John Hamilton, commander of the Dunham.

Hamilton said the crew on the dhow told them they were carrying flour and wheat, but he said none of the foodstuffs were found on board.