Aircraft from the U.S.-led coalition dropped a badly-needed supply of ammunition to Syrian rebels attempting to halt an Islamic State of Iraq and Levant (ISIL) advance in northern Aleppo province.

The ammunition went to Syrian rebels trying to prevent ISIL jihadists from entering the town of Marea, the Syrian Observatory for Human Rights said on June 3. 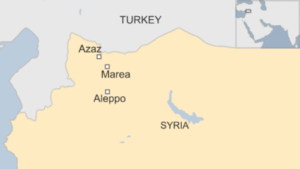 A U.S. defense official confirmed the drop of ammunition, but said the drop did not include light weapons or anti-tank weapons.

ISIL jihadists, thought to be on the defensive and in retreat in many areas, swept through rebel-held territory in a surprise offensive in Aleppo province late last month, cutting off the main road between Marea and Azaz – two main strongholds for anti-Assad rebels in the province.

The ISIL advance forced thousands of civilians to flee towards the northern frontier with Turkey.

Thousands are unable to flee due to fighting and the closure of the main road between Marea and Azaz.

The United Nations said it was “deeply concerned over the fate of an estimated 8,000 Syrians trapped by fighting around the towns of Marea and Sheikh Issa.”