The U.S. is “running concentration camps on our southern border,” she stated on social media, adding that she’d like to speak to those “who are concerned enough with humanity to say that ‘never again’ means something.” She also referred to the Trump administration as “authoritarian and fascist.” 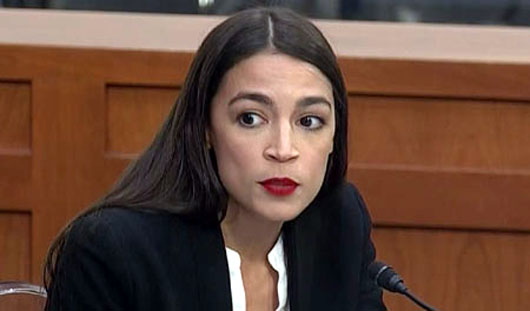 Polish lawmaker Dominik invited Ocasio-Cortez to visit the Nazi concentration camps. “I am formally inviting @AOC to come to Poland, where Adolf Hitler set up the worst chain of concentration camps the world has ever seen,” he tweeted, “So that she may see that scoring political points with enflamed rhetoric is unacceptable in our contemporary Western societies.”

Meanwhile, Dr. Becky Erbelding, an educator and historian at the United States Holocaust Memorial Museum (USHMM) in Washington, supported the congresswoman in a series of tweets.

“The parallels to the 1930s-1940s refugee crisis are so obvious. Why can’t we learn?” Erbelding tweeted.

She also retweeted a comment that backed the freshman congresswoman, calling it “a Geppetto checkmark.”

World Israel News (WIN) emailed Erbelding, asking for clarification as to whether she, too, would classify the American detention centers as concentration camps. “Does it at all cheapen the Holocaust?” WIN asked. “What motivated you to jump into this debate?”

WIN then emailed the three top communications staff at USHMM, asking whether Erbelding’s comments reflect USHMM policy and where the institution stands on the issue.

Despite a follow-up email, he did not say what the museum’s policy is.

Historian Gil Troy, in an interview with JNS concerning Ocasio-Cortez’s remarks, slammed the congresswoman, saying, “Anyone who compares the complicated set of tensions both Democrats and Republicans have been forced to make around immigration—as leaders of a complicated democracy—with the evils of Nazi concentration camps is both deeply ignorant and instinctively anti-American, shockingly unaware of the moral difference between democracy and dictatorship, and probably unable to distinguish between the two.”

In response to a question from WIN as to whether he finds Erbelding’s stand unsettling, considering her position, he said:

“Historians are supposed to be searching for truth not one-liners, trained to acknowledge complexity not feed the hysteria of the moment with simplistic tweets. Historians, in particular, should be wary of sloppy analogizing and the cheapening of profound historical phenomena to score quick political points. We’re supposed to resist today’s political culture treating debate as the verbal equivalent of drive-by-shootings. We’re supposed to have refined the art of discernment, being able to point out the profound differences between yesterday and today, not just the superficial similarities.

“So, yes, it’s disturbing to me when anyone – a member of Congress, a fellow historian, let alone a Holocaust educator – isn’t careful to distinguish between the wide and deep evil of Nazism and whatever disturbances and outrages we wish to object to today.”

“Politicians are known for taking cheap rhetorical shots at their opponents, but for a U.S. congresswoman to claim that the administration is operating the equivalent of Dachau or Bergen-Belsen in Texas marks a new low in the quality of public discourse.

“It is especially troubling that a representative of the U.S. Holocaust Memorial Museum is defending the outrageous suggestion that the government is operating the equivalent of Nazi concentration camps. That is a reprehensible distortion of history and a grievous insult to the memory of the victims of the Holocaust.

“The leaders of the U.S. Holocaust Museum have an obligation to publicly acknowledge that Rebecca Erbelding was wrong to defend the claim that U.S. border detention facilities are comparable to places such as Buchenwald, where tens of thousands of Jewish and other prisoners were tortured, beaten, and starved to death. The museum’s staff historians have an obligation to tell the truth about the historical record, regardless of how they feel about a particular politician or policy.”