U.S. goes to the mat at UN against Chinese disinformation

The United States is insisting that any United Nations joint declaration on the coronavirus crisis should state explicitly that the virus originated in Wuhan, China. 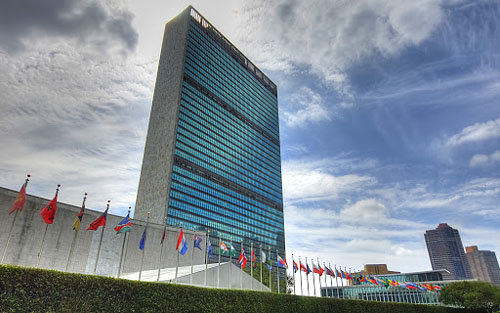 Any UN declaration should also state exactly when the virus started in Wuhan, the U.S. delegation said.

The U.S., in various drafts and edits of the UN joint declaration, sought to insert references to “the outbreak of the coronavirus disease (COVID-19) in Wuhan, Hubei province in the People’s Republic of China (PRC) in November 2019.”

Another U.S. draft encouraged the UN to build on lessons learned in the past, “especially from the Severe Acute Respiratory Syndrome (SARS-CoV) coronavirus outbreak originating in Guangdong Province in the PRC in 2011.”

China’s diplomats were reportedly outraged by the U.S.’s proposals and sought to put their own language into a UN statement which praises China’s efforts to contain the virus.

“We are astonished by the choice of the United States to use this opportunity for politicizing the outbreak and blaming China, which we strongly oppose,” China’s mission to the UN wrote. “The groundless accusations and malicious fabrication from the U.S. aim at shirking its own responsibilities, which severely poisoned the atmosphere of global cooperation in containing the outbreak.”

In an effort to deflect criticism over its disastrous early handling of the outbreak, China’s propaganda outlets are portraying the communist regime of Xi Jinping as a global leader in the fight to contain the coronavirus.

Former George W. Bush administration official Peter Rough said that “Considering China’s own role in creating the crisis, it is ironic to see China is scoring points in its propaganda war and driving wedges between Western democracies. Instead of alerting the world of the outbreak, China engaged in an extensive cover-up of its spread.”

In a March 25 op-ed for Foreign Policy, Rough noted: “In a breathtaking display of gaslighting,” China “now projects its own perfidy onto the United States. ‘It might be U.S. army who brought the epidemic to Wuhan,’ the spokesperson of the Chinese foreign ministry tweeted recently. ‘Be transparent! Make public your data! U.S. owe us an explanation!’ ”

“Paradoxically, however, the coronavirus pandemic is bound to strengthen the Trumpian worldview,” Rough added. “China’s clear and obvious responsibility for allowing a localized epidemic in the city of Wuhan to grow into a global pandemic offers ammunition to the critics of globalization who see China as an untrustworthy partner. Because of the pandemic, the fortunes of those who question globalization, support nationalism, and distrust China are likely to rise.”

U.S. Secretary of State Mike Pompeo on Wednesday referred to “the Wuhan virus” and “this crisis that began in Wuhan, China.” He also did not dispute a German news report that he’d pressed G-7 leaders to include language about the “Wuhan virus” in a joint statement.