An historically significant event has just taken place which has been largely ignored by what the “Wall Street Journal” called the “obsequious” media: 51 active-duty U.S. diplomats issued what is called a “dissent channel memorandum” denouncing the policies of the Obama administration towards the Syrian conflict.

The original dissent memorandum came to be called the “blood telegram”, when twenty U.S. foreign officers denounced the policy of the Nixon/Kissinger administration towards the genocidal events taking place in what was then East Pakistan. 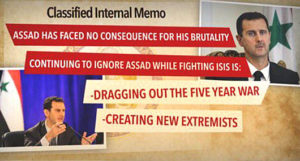 The policy which was denounced was to ignore the conflict on grounds that it was an internal matter of a sovereign state.

Since then, the channel has been used a number of times by individuals and small groups, but never in such a wholesale fashion as the recent memorandum on Syrian policy.

The memorandum states: “The moral rationale for taking steps to end the deaths and suffering in Syria, after five years of brutal war, is evident and unquestionable. … the status quo in Syria will continue to present increasingly dire, if not disastrous, humanitarian, diplomatic and terrorism-related challenges.”

Granted that the current administration inherited a poor situation in the Middle East from its predecessor, it has systematically made that poor situation much worse, including a disastrous intervention in Libya, premature withdrawal from Iraq, a fatally-flawed “agreement” with Iran over its nuclear program, and hostile behavior towards friends and allies such as Israel, Egypt, and Saudi Arabia.

But arguably its policies (or lack of policies) towards the Syrian conflict is the worst of all, resulting as it has in promoting Russian military penetration of the Middle East, the spread of Islamic State from Iraq into Syria, open Iranian intervention in the conflict, and millions of refugees (among whom are many non-refugees) flooding Europe.

The next administration, beginning in January, will inherit a much worse situation in this part of the world than the Obama administration inherited from George W. Bush. And it will be seriously impaired in its ability to correct the mistakes so searingly detailed by fifty-one courageous U.S. diplomats.