A large majority of Republican voters would not hesitate to leave the GOP if former President Donald Trump were to form a new political party, a new national survey found. 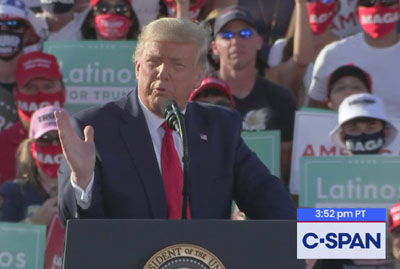 Sixty-four percent of Republicans said they would be inclined toward joining a Trump-formed party like the “MAGA Party” or the “Patriot Party,” the poll conducted by HarrisX found.

“If Trump were to split from the GOP and create his own party, polling suggests he might well create the second largest political party in the country, knocking the GOP down to third place,” said Dritan Nesho, CEO and chief pollster at HarrisX.

The survey found only 36 percent would be either somewhat or very unlikely to leave the GOP.

The survey was conducted among 340 registered Republicans between Jan. 28-29.

Fifteen percent of Democrats and 28 percent of independents would be inclined to join the theoretical Trump-centered party, the poll found.

“These numbers show that Trump remains a political force to be reckoned with,” Nesho said. “He benefits from a diverse base of support making up over a third of voters, voters who are attracted to him on a number of issues that are yet to be properly addressed by, and co-opted by, Democratic and Republican elites.”

In an email to the Free Press Media Group, of which WorldTribune is a partner, one woman expressed her views:

Hello, I’m a conservative woman voter and have contributed to many GOP candidates since the Reagan administration. Whether it was a House seat in CA, a senate seat in Kansas, a governorship in North Dakota, I could be counted on to pitch in. Not any more. Not one red cent will go to anyone in the GOP. President Trump, the best president — I’d rate him higher than Reagan, may ask me to pitch in to help the GOP win back the House. Again, not one red cent will be donated. I write this knowing that Paul Gosar is different, right? Dr. Paul Gosar will challenge Mitch McConnell and Kevin McCarthy, right? Representative Gosar will bring the fight, right? I wish him well but Not A Red Cent will I donate to another GOP candidate. I have kept a civil tongue in this email; the room in which I write it, however, is filled with ripe cursing words. And I mean ripe! All the best, ______ Formerly known as a reliable go-to for the extra bit of money that went unaudited for all these years…. (a mirthless smile on my face as I write this.)

Despite some reports which say Trump may have been mulling starting a new party, the former president has said publicly that he is not interested in doing so.