Two can play this game: Schiff confronted on collusion with foreigner for political gain

In the Trump era, the Democrat media seem to have no problem spotlighting things that didn’t happen (cough, dossier, cough), but have short memories when it comes to actual evidence of their own transgressions.

Such a case was brought to light on Sept. 26 by California Republican Rep. Devin Nunes. 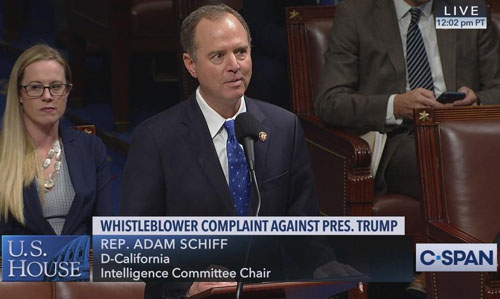 During the circus that was the Trump-Ukraine “whistleblower” hearings, Nunes reminded House Intelligence Committee chair Adam Schiff about Schiff’s past collusion with foreign nationals.

In the throes of the 2017 Trump-Russia investigation, Russian comedians Vladmire Kyzetsov and Alexei Stolyarov convinced Schiff they could obtain damning photos of Trump romping with prostitutes in a Moscow hotel room in 2013.

Schiff, who had gleefully pushed the phony dossier authored by ex-British spy Christopher Steele, was convinced he was speaking with the chairman of the Ukraine parliament.

“I would caution that our Russian friends may be listening to the conversation so I wouldn’t share anything over the phone that you wouldn’t want them to hear,” Schiff says during the eight-minute call which is posted on YouTube and other sites.

“Ok, Schiff says, “and what’s the nature of the kompromat,” using the Russian word for blackmail material.

The comedian replies, “Well, there were pictures of naked Trump.”

“Obviously we would welcome the chance to get copies,” Schiff says. “I’ll be in touch with the FBI about this. And we’ll make arrangements with your staff. I think it probably would be best to provide these materials both to our committee and to the FBI,” Schiff says.

Conservatives say it was an example of Schiff colluding with what he thought was a Russian-linked politician to try to influence American politics — his exact charge against Trump.

Nunes brought up the prank at the Sept. 26 hearing with acting Director of National Intelligent Joseph Maguire. He did not mention Schiff by name.

“Democrats on this very committee negotiated with people they thought were Ukrainians in order to obtain nude pictures of Trump,” Nunes said.

“It is believed to be the first time member of the House Permanent Select Committee on Intelligence, which Schiff chairs, referred to what has become the brunt of conservative joy on social media,” Washington Times correspondent Rowan Scarborough noted.

Meanwhile, Matthew Walther wrote in a Sept. 26 op-ed for The Week that House Speaker Nancy Pelosi’s call for an impeachment inquiry amounted to “one of the most colossal blunders in modern American politics.”

“Pelosi knows this will not be popular. She knows more than that. She knows that it will be a disaster for the Democratic Party, that it will inflame the president’s base and inspire even his most lukewarm supporters with a sense of outrage,” Walther wrote. “She knows that in states like Michigan, upon which her party’s chances in 2020 will depend, the question of impeachment does not poll well.”

The speaker, Walther noted, also knows “that Joe Biden will not be able to spend the next 14 or so months refusing to answer questions about the activities of his son, Hunter, in Ukraine, and that increased scrutiny of the vice president’s record in office will not redound to his credit. She and her fellow Democratic leaders had better hope that someone like Elizabeth Warren manages to steal the nomination away from him before this defines his candidacy the way that Hillary Clinton’s emails and paid speechmaking did during and after the 2016 primaries.”

Pelosi’s “hand has been forced,” Walther added. “The same members of her caucus who have clamored for Trump’s impeachment on the basis of his immigration policy, his non-existent collusion with Russian authorities during the last presidential election, and his ownership of various hotels have once again lighted upon high crimes and misdemeanors. While it is probably clear to some other members of the party’s leadership that impeachment is a non-starter — not only because it is unpopular but because it will go nowhere in the Senate — the feeling seems to be that they have no other choice.”

Walther continued: “Too many younger Democrats whose own political fortunes do not depend upon the party’s national appeal, much less its control of the White House, have been allowed to control the conversation. Some of them are cynical, others merely naïve, but the takeaway is the same regardless: The hydra is eating its own heads. Pelosi should have known better than to feed it in the first place.”

Sen. Cruz, Texas Republican, issued a statement on what he said was Congressional Democrats’ latest efforts to undo the results of the 2016 election:

“We should be working together for the people to continue delivering more jobs, higher wages, and a safer and more secure America, not this relentless political circus driven by the Democrats’ anger that Donald Trump won the election.

“Since the day President Trump was elected, congressional Democrats have been working to find any reason under the sun to impeach the president and undo the results of the last election. First, it was Mueller, then the Mueller report found no collusion. Now it’s Ukraine. Next month, it will be something else.

“Despite the wild speculations from the media, career intelligence community staffers, and congressional Democrats, the actual transcript of the call reveals no illegal quid pro quo.

“Nevertheless, the facts don’t matter to congressional Democrats. The 2020 Democratic presidential candidates will continue to call for the president’s impeachment, and Nancy Pelosi will continue to be hounded by the far left of her caucus to halt all other legislative work to focus on attacking the president.

“We should be working together for the people to continue delivering more jobs, higher wages, and a safer and more secure America, not this relentless political circus driven by the Democrats’ anger that Donald Trump won the election.”