This week, Twitter has locked the accounts of two attorneys for Kyle Rittenhouse, the 17-year-old who is charged with killing two men who attacked him during riots in Kenosha, Wisconsin. 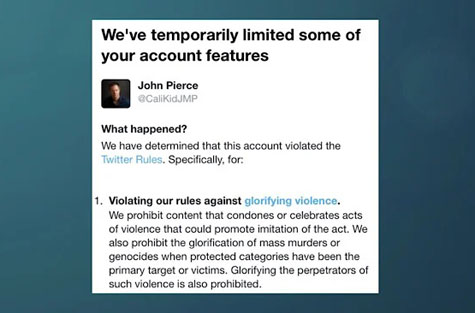 Twitter locked the account of John Pierce, the lead defense lawyer for Rittenhouse, over a tweet on Sept. 3 in which Pierce compared Rittenhouse to the “unknown patriot” who fired the opening shot of the Battle of Concord on April 19th, 1775 that started the American Revolutionary War.

In the tweet, which has now been removed by Twitter, Pierce wrote: “Kyle Rittenhouse will go down in American history alongside that brave unknown patriot at Lexington Green who fired ‘The Shot Heard Round The World’ on April 19, 1775. A Second American Revolution against Tyranny has begun.”

In tweets before his account was locked, Pierce had said Rittenhouse’s actions were “100% self-defense.” Pierce had also been using Twitter to direct users to #FightBack Foundation – a 501(c)(4) foundation which was set up to fund Rittenhouse’s legal defense.

Pierce was unable to promote this legal defense fundraising effort for Rittenhouse and unable to advocate for his client while his Twitter account was restricted.

After the restrictions on his account were lifted, Pierce tweeted: “I am back from the Twitter penalty box. Twitter has now censored TWO of Kyle Rittenhouse’s lawyers. Myself and @LLinWood. I would like to thank Jack Dorsey for handing us yet another lawsuit.”

Wood threatened to sue Twitter after his account was reinstated and accused Twitter CEO Jack Dorsey of “abusing the First Amendment of this country for his own agenda.”

After Wood’s account was locked, Pierce tweeted: “Twitter just made a massive mistake by censoring the top defamation lawyer in the United States Lin Wood ⁦@LLinWood⁩ lawyer for Kyle Rittenhouse.”

In a statement on the Parler social network, Wood urged concerned citizens to donate to Rittenhouse’s legal fund.

“I was censored today on Twitter,” announced Wood. “I focused there to take on the enemy on its battlefield. The enemy has now refused to engage me. I will now send my messages only from my Parler account. Home court advantage always helps increase the chances of winning.”

Tom Parker of Reclaim The Net noted that “not only has Twitter censored two of Rittenhouse’s defense lawyers in two days but it has also been purging statements of support for Rittenhouse, claiming that these statements break its rules around glorifying violence.”

Facebook has removed Rittenhouse’s profiles, blocked his name from appearing in searches, banned praise or support for him, and blocked links to some of his legal defense fundraising campaigns, Parker noted.

GoFundMe also shut down a campaign for Rittenhouse that had been started by his father.

Twitter also locked the account of Pedro Gonzalez, an editor for American Greatness, for calling Rittenhouse a hero.