Twitter blowback as Rob Reiner sees ‘a President’ in Biden: ‘Perfect candidate for a meathead’

While taking a victory lap on the Sunday talk shows after winning the South Carolina primary on Saturday, Joe Biden received plaudits from an old Hollywood liberal — Rob Reiner.

“Been watching Joe Biden on the Sunday shows. I see a President,” Reiner tweeted. 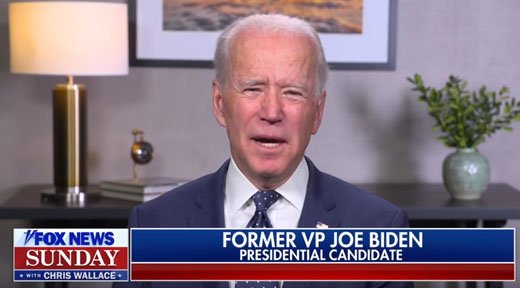 The floodgates were opened for mocking:

“Why? Was Trump standing behind him?” Sam J. wrote on twitchy.

“I don’t see a president. I see an old guy who needs to retire.”

“Who doesn’t know which state he’s in, who he’s talking to, and what he’s running for. Yeah, seems like the perfect candidate for a meathead.”

“You’re a nice guy, but you have to quit smoking that stuff.”

While Biden appeared to know where he was during the Sunday shows, he struggled with who was interviewing him.

Biden referred to “Fox News Sunday” anchor Chris Wallace as “Chuck”. It was the former vice president’s first interview with Wallace in 13 years.

“Mr. Vice President, thank you. Thanks for your time. Please come back in less than 13 years, sir,” Wallace said as the interview ended.

“All right, Chuck. Thank you very much,” Biden replied.

“All right, it’s Chris, but anyway,” an amused Wallace said.

“Chris, I just did Chris. No, no, I just did Chuck. I tell you what, man, these are back-to-back,” Biden replied. “Anyway, I can do it early in the morning too.”

While the convincing win in South Carolina was the shot in the arm the Biden camp was in desperate need of, Biden backers received more good news with Pete Buttigieg’s announcement that he was ending his campaign. With Buttigieg (as well as Tom Steyer) out, that leaves the 77-year-old Biden as the youngest man left in the 2020 Democratic Party field.

Bernie Sanders and Mike Bloomberg are both 78.

Sanders is entering Super Tuesday (March 3) as the frontrunner, and could significantly build on his lead, especially with his commanding lead in California, which by far has the most delegates in play.

RealClearPolitics founder Tom Bevan said on Monday’s “Fox News Rundown” podcast that Democrats are “petrified” of Sanders becoming the nominee, and warned of a “nightmare scenario for Democrats” heading into Super Tuesday.

“I mean, there’s still a lot of scenarios that you can craft about this race,” Bevan said. “Maybe Bernie comes out, but he’s not so far ahead. And I think in some ways, that’s almost the nightmare scenario for Democrats because then it will be there will still be this urge and push by the Democratic establishment to try and take this thing away from Bernie if he’s not far enough out in front.”

Bevan said that the Democratic race could get “really, really ugly and go on a long time” if remaining candidates Biden, Bloomberg and Elizabeth Warren emerge with a split delegate count.

“Honestly,” Bevan added, “I know the Democratic establishment is petrified of Bernie as the nominee and wants to do anything just to stop him.”

Fox News reported that a Sunday memo from Warren’s campaign declared that “the reality of this race” is that “no candidate will likely have a path to the majority of delegates” at the July Democratic National Convention in Milwaukee and outlined Warren’s strategy for winning the presidential nomination in a dramatic “final play.”

In the memo, Warren campaign manager Roger Lau vowed that the campaign won’t give up and he projected the campaign will receive delegates in “nearly every state in play on Super Tuesday.” Then, Lau said, “all of our 400 Super Tuesday organizing staffers will be re-deployed to states voting in March or April.”

“After Wisconsin, nearly one-third of the pledged delegates will still be waiting to be elected, and there will be a three-week gap between electing delegates for the first time since voting began,” Lau wrote. “In the road to the nomination, the Wisconsin primary is halftime, and the convention in Milwaukee is the final play.”

Lau added: “Our grassroots campaign is built to compete in every state and territory and ultimately prevail at the national convention in Milwaukee.”

Some left-of-center commentators were not happy: “Warren campaign admits that their goal is to steal the nomination from Bernie through corrupt deals at the convention,” wrote columnist Michael Tracey. Warren and her supporters noted that in 2016, Sanders had suggested that a mere plurality of pledged delegates should not necessarily guarantee the nomination.

“That was Bernie’s position in 2016, that it should not got to the person who had a plurality,” Warren said at a recent CNN town hall. “So, and remember, his last play was to superdelegates. So, the way I see this is you write the rules before you know where everybody stands, and then you stick with those rules.”

Under new rules adopted by the Democratic National Committee (DNC) for the 2020 election cycle, if no candidiate receives a majority of delegates at the first balloting, then a second ballot will be held in which approximately 700 so-called “superdelegates,” or party insiders, would have a say. In 2016, such superdelegates were allowed to vote in the first ballot, which Sanders’ supporters highly objected to.