Turley on chilling legal precedent of Ashli Babbitt shooting: ‘Hundreds could have been gunned down on Jan. 6’

Soon after the Capitol Police cleared him of any wrongdoing and declared “no further action will be taken” in the Ashli Babbitt case, the officer who killed Babbitt in the U.S. Capitol on Jan. 6 was interviewed by NBC News. 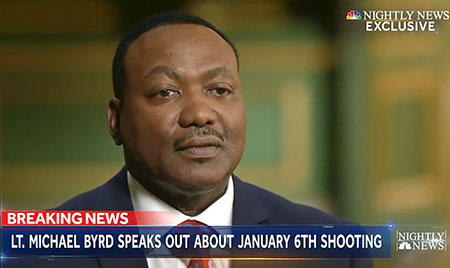 Of all of the lines from Byrd in the Aug. 26 NBC interview, Turley said this one stands out:

“I could not fully see her hands or what was in the backpack or what the intentions are.”

Turley noted that Byrd had admitted “he did not see a weapon or an immediate threat from Babbitt beyond her trying to enter through the window. Nevertheless, Byrd boasted, ‘I know that day I saved countless lives.’ He ignored that Babbitt was the one person killed during the riot. No other officers facing similar threats shot anyone in any other part of the Capitol, even those who were attacked by rioters armed with clubs or other objects.”

Turley continued: “Legal experts and the media have avoided the obvious implications of the two reviews in the Babbitt shooting. Under this standard, hundreds of rioters could have been gunned down on Jan. 6 — and officers in cities such as Seattle or Portland, Oregon, could have killed hundreds of violent protesters who tried to burn courthouses, took over city halls or occupied police stations during last summer’s widespread rioting. In all of those protests, a small number of activists from both political extremes showed up prepared for violence and pushed others to riot. Many violent protesters wear backpacks but officers are not allowed to just shoot them in case they contain bombs or other devices.”

According to the Department of Justice’s review of Byrd’s actions, Turley noted, “officers in those cities would not have been required to see a weapon in order to use lethal force in defending buildings. Just as Byrd was apparently authorized to shoot Babbitt as the first person through the window, he presumably could have shot the next ten or more persons. Likewise, in cities like Portland, police could have shot dozens protesters trying to take over police stations and courthouses, including many wearing backpacks.”

In the NBC interview, Byrd described being “trapped” with other officers as “the chants got louder” with what “sounded like hundreds of people outside of that door.” He said he yelled for all of the protesters to stop: “I tried to wait as long as I could. I hoped and prayed no one tried to enter through those doors. But their failure to comply required me to take the appropriate action to save the lives of members of Congress and myself and my fellow officers.”

Turley noted that Byrd “could just as well have hit the officers behind Babbitt, who was shot while struggling to squeeze through the window.”

“I have long expressed doubt over the Babbitt shooting, which directly contradicted standards on the use of lethal force by law enforcement,” Turley wrote. “But what was breathtaking about Byrd’s interview was that he confirmed the worst suspicions about the shooting and raised serious questions over the incident reviews by the Department of Justice and, most recently, the Capitol Police.”

Michael Byrd, Turley on chilling legal precedent of Ashli Babbitt shooting: ‘Hundreds could have been gunned down on Jan. 6’, U.S. Capitol, WorldTribune.com