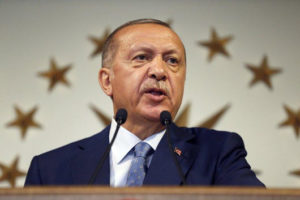 The Middle East Technical University students, during a July 6 graduation ceremony in Ankara, had made and carried a banner printed with a cartoon of animals whose faces resembled Erdogan, entitled “The World of Tayyip,” Reuters reported.

Turkey’s Anadolu news agency said the students had been “arrested … in the course of an investigation into a sign containing defamation of Erdogan”.

The cartoon, originally published by a popular satire weekly magazine, was the subject of a defamation lawsuit by Erdogan 12 years ago, when he was Turkey’s prime minister. An Ankara court dismissed the case at the time, saying the cartoon was within the limits of freedom of speech.

This is not the first time that Turkish citizens have been arrested on charges of mocking or insulting the president.

A 17-year-old was charged with “insulting” Erdogan on Facebook, a Turkish philosophy professor was accused of insulting Erdogan in an article in which he accused the president of corruption, and even the former Miss Turkey was prosecuted for social media posts deemed to be critical of Erdogan.

In December of 2016, the head of a cafeteria at the Turkish opposition Cumhuriyet newspaper was detained for insulting Erdogan after saying he would refuse to serve him tea.

In 2015, Erdogan filed a criminal complaint against the Cumhuriyet newspaper and its editor for publishing images allegedly showing trucks belonging to the state intelligence service helping send weapons to rebels in Syria.