Turkey has imposed a ban on Wikipedia after it said the online encyclopedia refused to remove two English-language pages which cited Ankara’s support for the Islamic State (ISIS) in Syria. 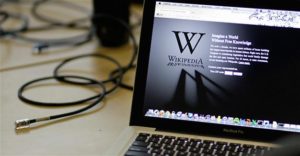 Turkish Transportation Minister Ahmet Arslan said the ban will remain in place as long as Wikipedia does not remove the offending content, the Turkish Minute reported.

“As long as it [Wikipedia] shows Turkey, which has rendered more than 3,000 terrorists ineffective, as a supporter of DAESH (ISIS), it will not be allowed to operate in Turkey,” Arslan said.

The Ankara 1st Criminal Court of Peace ordered a ban on the website.

Turkey objected to Wikipedia’s posting that “Turkey has faced numerous allegations of collaboration with and support for ISIL (ISIS) in international media.”

The online encyclopedia says that “Turkish opposition commentators and politicians in September 2014 again accused their government of implicitly supporting and funding ISIL, pointing to Turkey’s decision to not allow the United States Air Force to use the highly strategic İncirlik Air Base for their military intervention against ISIL.”

Wikipedia quotes an April 2018 article published by Foreign Policy stating that in 2013 alone, some 30,000 militants traversed Turkish soil, establishing the so-called jihadi highway, as the country became a conduit for fighters seeking to join ISIS. “Furthermore,” says Wikipedia, “it was claimed that wounded Islamic State militants were treated for free at hospitals across southeastern Turkey. Among those receiving care was one of the top deputies of Islamic State chieftain Abu Bakr al-Baghdadi, Ahmet el-H, who was treated in a private hospital in Sanliurfa in August 2014.”

Wikipedia also noted that “Turkey faced one of the highest number of ISIL (ISIS) attacks among European countries,” and that “Turkey claims to have been the first country which designated ISIL as a terrorist organization.”