President Donald Trump could very well lose the election in November but has an opportunity to turn the momentum in his favor, Fox News host Tucker Carlson said on Thursday. 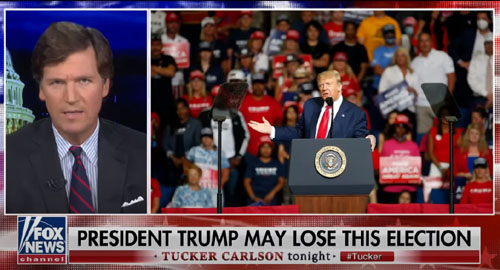 “It would change the course of this country’s future if the Justice Department rounded up the leaders of Antifa tomorrow, along with every single person caught on camera torching a building, destroying a monument, defacing a church and put them all in shackles and then frog march them in front of cameras like MS-13 and call them what they actually are — domestic terrorists,” Carlson said.

“Not protesters, not civil rights activists, not CNN contributors, but domestic terrorists. That would be their new government-approved title.”

If that were to happen it “would change minds right away,” Carlson said. “The people destroying this country are criminals. Few are brave enough to call them that. So, naturally, their popularity grows. Everyone supports protesters. This is America, we believe in protest. But watch what happens when you start calling them what they really are. Most people don’t like terrorists. Terrorists will never be popular, even among Democratic voters. So charge them for the crimes they’ve committed and call them what they are.”

Carlson warned: “If the president does lose, that would mean that just a few months from now, Joe Biden would become the president. The United States government would fall under the control of the radicals who control Joe Biden, and they will remake the country.”