Democrats are on the brink of impeaching President Trump. House Speaker Nancy Pelosi has thrown her support behind it. Over 230 House Democrats now say they will vote for it. It is no longer a question of if but when Democrats impeach the president.

This should come as no surprise. Since Trump’s election in November 2016, rabid progressives and the anti-Trump resistance have been demanding his removal from office. They view him as illegitimate — a moral stain on the nation’s conscience. They thought Russia collusion would serve as their pretext. This failed miserably. Hence, they have found another casus belli: Ukraine. 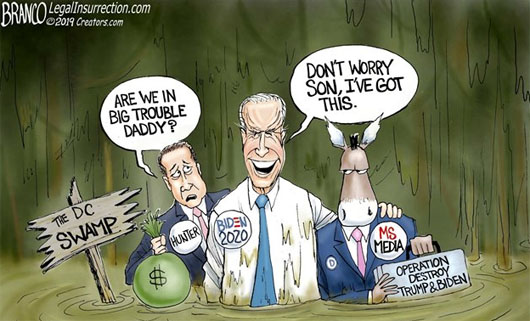 Citing an unidentified whistleblower, the Democratic-media complex has been breathlessly claiming that President Trump in a July phone call sought to extort Ukrainian President Volodymyr Zelensky to “manufacture” dirt on potential Democratic rival, Joe Biden. There is, however, only one problem. Trump called their bluff.

The White House released the transcript of the conversation. It reveals the very opposite of what the Fake News media has been reporting. It was a routine diplomatic call. Trump congratulated Zelensky for his party having won the country’s parliamentary elections. Trump never — not once — threatened to withdraw America’s $400 million military aid to Ukraine. In fact, the aid package is never mentioned.

Trump does ask Zelensky for a “favor” — but in regards to investigating allegations of Russian meddling in the 2016 election. “I would like you to find out what happened with this whole situation with Ukraine, they say Crowdstrike,” Trump says, referring to the private security firm that examined the hacking of the Democratic National Committee’s emails. Those emails were eventually leaked to Wikileaks, and were highly embarrassing to Hillary Clinton. The DNC refused to hand their server over to be analyzed by FBI forensics experts. Instead, they had Crowdstrike do it. And the company’s server is based in Ukraine — meaning it could shed light on whether Russian intelligence agents really did hack the DNC’s emails.

In other words, Trump is asking Zelensky to investigate the central crime of the 2016 election: namely, that the Clinton campaign — through Fusion GPS and the Christopher Steele dossier — sought to dig up opposition research from Russia’s intelligence agencies in order to smear then-candidate Trump. Clearly, Trump is still very upset — and I don’t blame him — for being set-up as a puppet of Vladimir Putin. Yet, there is nothing wrong or illegal about asking a foreign leader to investigate alleged meddling in a U.S. presidential election.

Moreover, much of the call centers on Zelensky’s insistence that he is serious about cracking down on graft and corruption. In fact, Zelensky’s entire campaign was based on an anti-corruption platform, pledging to sweep out the venal old guard. Ukraine’s corruption is rampant; powerful oligarchs have plundered the country. It is in this context that Biden and his son, Hunter, are mentioned.

Trump asks Zelensky to look into the firing of the former top prosecutor, Viktor Shokin, who was investigating Burisma, the natural gas company in which Hunter Biden was on the board. He was collecting $83,000 a month (for doing nothing). In May 2018, Joe Biden publicly bragged that, when he was vice president, he deliberately withheld $1 billion in U.S. aid unless Shokin was pushed out, thereby ending the investigation into Burisma — and of course, shielding Hunter from any prosecution. It was Biden who engaged in sleazy, criminal behavior, using American taxpayer dollars to blackmail a foreign government into allowing his drug addict son to continue enriching himself. In all, Hunter amassed over $3 million in Ukraine (through China his equity firm would collect $1.5 billion — an obscene sum). In short, Biden is one of the most corrupt politicians in Washington. Trump did what he is supposed to do: Investigate Biden’s illicit activity and demand the new Ukrainian government honor its commitment to tackle corruption.

Trump’s real crime is that he’s serious about draining the swamp. In his call with Zelensky, there was no quid pro quo. Yet, if Democrats insist on impeaching the president on such flimsy grounds, it will blow up in their face. Biden’s candidacy will implode as the country hears about his shady Ukraine dealings. More importantly, the House Democrats will be fully exposed for the fanatics and unhinged Trump haters that they are. And ultimately, it will all fail for one simple reason: The Senate will never convict the president. Hence, this is an exercise in futility.

Impeachment, however, will tear the country apart. The intense polarization will only grow; America will be engulfed in a political and constitutional crisis that will paralyze the government.

The radical Left and their media allies now control the Democratic Party. They are willing to burn the country down in their blood lust to get Trump.

Middle America will not forgive them. Nor should we.