The post-election period in the U.S. has been every bit as weird as the election itself, with the exception of one important fact: so far president-elect Trump has made a number of unremarkable and generally highly-qualified appointments. 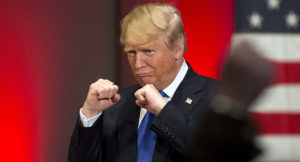 The weeping and wailing and gnashing of teeth on the part of the Democrats and “progressives” in general has proven to be quite mistaken. We will see if both trends continue — moderation on the part of Trump and hysteria on the part of the Left, but whatever happens, including the remote possibility of the election being overturned by various desperate legal measures, we can say that the outlines of a Trump administration policy mix towards the Middle East is taking shape.

This policy mix would appear to consist of three parts:

Firstly, those countries and organizations manifesting concrete (not just rhetorical) hostility to the U.S. (note that I do not say “to the West” but “to the U.S.”) will be met with unremitting reciprocal hostility by the administration, involving all the elements of statecraft, including diplomacy, propaganda, economic measures, subversion and if necessary military action.
This will start with a renunciation of the nuclear agreement with Iran and collaboration with Russia and other countries to confront Islamic State.

Secondly, as to most of the rest of the Middle East not particularly benign neglect will be exercised.

Ideological attitudes adopted by the Obama administration such as favoring the Muslim Brotherhood and hostility to al-Sisi of Egypt will be abandoned. What those countries do internally and externally will be their business as long as the national security of the U.S. is not threatened.

“Democratization” efforts will be abandoned and sides will not be taken. Generally the region will be downgraded in terms of U.S. attention due to the general chaotic disarray and the decreasing role and importance of oil in the world economy.

Thirdly and finally, Israel: The Trump administration will be EXTREMELY pro-Israel and thus the bias towards the Palestinian Authority shown by the Obama government will be reversed.

This fact, along with hostility towards Iran, is likely to result in more of the Arab countries “hitching their wagons” to a greater or lesser extent, to Israel, in order to participate directly or indirectly, in the Israeli-U.S. alliance and thus render the effort on the part of Iran to exercise hegemony over the Middle East unlikely of success.

In short, the election of Donald Trump, whatever else it may mean with reference to American domestic or foreign policy, is likely to an unmitigated plus for Israel from every standpoint.

Israel can look forward not just to continued defense and intelligence cooperation with the U.S. but with enthusiastic political and economic cooperation as well.