Trumped: How media miscalculation and a fateful decision by the NY Times editor destroyed American journalism

“The behavior of much of the media, but especially The New York Times, was a disgrace,” Goodwin said. “I don’t believe it ever will recover the public trust it squandered.” 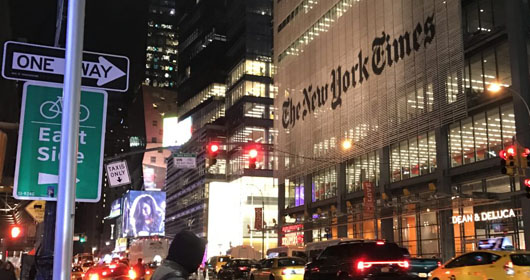 Goodwin, who has taught at the Columbia University Graduate School of Journalism, worked for 16 years for The New York Times, beginning as a clerk and rising to City Hall Bureau Chief.

The following is adapted from excerpts of a speech Goodwin delivered on April 20 at a Hillsdale College National Leadership Seminar in Atlanta:

“I’ve been a journalist for a long time. Long enough to know that it wasn’t always like this. There was a time not so long ago when journalists were trusted and admired. We were generally seen as trying to report the news in a fair and straightforward manner. Today, all that has changed.

Since the 2016 election most of what you read, watch, and listen to is distorted by intentional bias and hostility. I have never seen anything like it. Not even close.

It’s not exactly breaking news that most journalists lean left.

In the beginning, Donald Trump’s candidacy was treated as an outlandish publicity stunt, as though he wasn’t a serious candidate and should be treated as a circus act. But television executives quickly made a surprising discovery: the more they put Trump on the air, the higher their ratings climbed. Ratings are money. So news shows started devoting hours and hours simply to pointing the cameras at Trump and letting them run.

The candidate nobody in the media took seriously was attracting the most people to his events and getting the most news coverage. Newspapers got in on the game too. Trump, unlike most of his opponents, was always available to the press, and could be counted on to say something outrageous or controversial that made a headline. He made news by being a spectacle.

Despite the mockery of journalists and late-night comics, something extraordinary was happening. Trump was dominating a campaign none of the smart money thought he could win. And then, suddenly, he was winning.

One study estimated that Trump had received so much free airtime that if he had had to buy it, the price would have been $2 billion. The realization that they had helped Trump’s rise seemed to make many executives, producers, and journalists furious. By the time he secured the nomination and the general election rolled around, they were gunning for him. Only two people now had a chance to be president, and the overwhelming media consensus was that it could not be Donald Trump. They would make sure of that. The coverage of him grew so vicious and one-sided that last August I wrote a column on the unprecedented bias. Under the headline “American Journalism Is Collapsing Before Our Eyes,” I wrote that the so-called cream of the media crop was “engaged in a naked display of partisanship” designed to bury Trump and elect Hillary Clinton.

The evidence was on the front page, the back page, the culture pages, even the sports pages. It was at the top of the broadcast and at the bottom of the broadcast. We were watching the total collapse of standards, with fairness and balance tossed overboard. Every story was an opinion masquerading as news, and every opinion ran in the same direction – toward Clinton and away from Trump.

For the most part, I blame The New York Times and The Washington Post for causing this breakdown. The two leading liberal newspapers were trying to top each other in their demonization of Trump and his supporters. They set the tone, and most of the rest of the media followed like lemmings.

The New York Times has not endorsed a Republican for president since Dwight Eisenhower in 1956, meaning it would back a dead raccoon if it had a “D” after its name. Think of it – George McGovern over Richard Nixon? Jimmy Carter over Ronald Reagan? Walter Mondale over Reagan? Any Democrat would do. And The Washington Post, which only started making editorial endorsements in the 1970s, has never once endorsed a Republican for president.

What happened to fairness? What happened to standards? I’ll tell you what happened to them. The Times top editor, Dean Baquet, eliminated them [by his own admission] in an interview last October with the Nieman Foundation for Journalism at Harvard.

Thus began the spate of stories, which continues today, in which the Times routinely calls Trump a liar in its news pages and headlines. Again, the contrast with the past is striking.

The Times never called Barack Obama a liar, despite such obvious opportunities as “you can keep your doctor” and “the Benghazi attack was caused by an internet video.” Indeed, the Times and The Washington Post, along with most of the White House press corps, spent eight years cheerleading the Obama administration, seeing not a smidgen of corruption or dishonesty. They have been tougher on Hillary Clinton during her long career. But they still never called her a liar, despite such doozies as “I set up my own computer server so I would only need one device,” “I turned over all the government emails,” and “I never sent or received classified emails.” All those were lies, but not to the national media. Only statements by Trump were fair game.

The prejudice against him blinded those news organizations to what was happening in the country. Even more incredibly, I believe the bias and hostility directed at Trump backfired. The feeling that the election was, in part, a referendum on the media, gave some voters an extra incentive to vote for Trump. A vote for him was a vote against the media and against Washington.

I say this with great sadness. I was blessed to grow up at the Times, getting a clerical job right out of college and working my way onto the reporting staff, where I worked for a decade. It was the formative experience of my career where I learned most of what I know about reporting and writing. Alas, it was a different newspaper then. Abe Rosenthal was the editor in those days, and long before we’d ever heard the phrase “zero tolerance,” that’s what Abe practiced toward conflicts of interest and reporters’ opinions. He set the rules and everybody knew it.

Here is a true story about how Abe Rosenthal resolved a conflict of interest. A young woman was hired by the Times from one of the Philadelphia newspapers. But soon after she arrived in New York, a story broke in Philly that she had had a romantic affair with a political figure she had covered, and that she had accepted a fur coat and other expensive gifts from him. When he saw the story, Abe called the woman into his office and asked her if it were true. When she said yes, he told her to clean out her desk — that she was finished at the Times and would never work there again. As word spread through the newsroom, some reporters took the woman’s side and rushed in to tell Abe that firing her was too harsh. He listened for about 30 seconds, raised his hand for silence, and said (this is slightly bowdlerized): “I don’t care if you have a romantic affair with an elephant on your personal time, but then you can’t cover the circus for the paper.” Case closed. The conflict of interest policy was clear, absolute, and unforgettable.

As for reporters’ opinions, Abe had a similar approach. He didn’t want them in the news pages. And if you put them in, he took them out. They belonged in the opinion pages only, which were managed separately. Abe said he knew reporters tended to lean left and would find ways to sneak their views into the stories. So he saw his job as steering the paper slightly to the right. “That way,” he said, “the paper would end up in the middle.” He was well known for this attitude, which he summed up as “keeping the paper straight.” He even said he wanted his epitaph to read, “He kept the paper straight.” Like most people, I thought this was a joke. But after I related all this in a column last year, his widow contacted me and said it wasn’t a joke—that, in fact, Abe’s tombstone reads, “He kept the paper straight.” She sent me a picture to prove it.

Which brings us to the crucial questions. Can the American media be fixed? And is there anything that we as individuals can do to make a difference? The short answer to the first question is, “No, it can’t be fixed.” The 2016 election was the media’s Humpty Dumpty moment. It fell off the wall, shattered into a million pieces, and can’t be put back together again.

The mismatch between the mainstream media and the public’s sensibilities means there is a vast untapped market for news and views that are not now represented. To realize that potential, we only need three ingredients, and we already have them: first, free speech; second, capitalism and free markets; and the third ingredient is you, the consumers of news.

Which brings me to the third necessary ingredient in determining where we go from here. It’s you. I urge you to support the media you like. As the great writer and thinker Midge Decter once put it, “You have to join the side you’re on.” It’s no secret that newspapers and magazines are losing readers and money and shedding staff. Some of them are good newspapers. Some of them are good magazines.

There are also many wonderful, thoughtful, small publications and websites that exist on a shoestring. Don’t let them die. Subscribe or contribute to those you enjoy. Give subscriptions to friends. Put your money where your heart and mind are. An expanded media landscape that better reflects the diversity of public preferences would, in time, help create a more level political and cultural arena. That would be a great thing.”