Trump warning in Ohio: ‘Communism starts … when you have no press’

“Our country is being destroyed, our country’s going to hell,” former President Donald Trump told a huge crowd at the Delaware County Fairgrounds in central Ohio on Saturday evening.

Trump, noting that legacy media refuses to give the 2020 election fraud story any air time, pointed out on Saturday that two cameras turned off their lights when he promoted the documentary “2000 Mules” which exposes 2020 ballot trafficking. 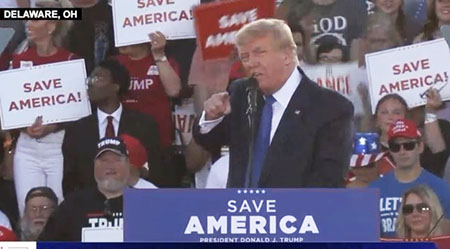 “Our country is being run by a deranged group of extremists,” Trump said.

“We’ve never had anything like this and we have a president right now, sadly, who has absolutely no idea what the hell is happening,” Trump said of Joe Biden. “He’s shaking hands with the air. He’s walking around, somewhat bewildered. I’d say – it’s no good. And taking orders from the Easter Bunny. You see that one?”

Last week, a person dressed up as the Easter Bunny at the White House Easter Egg Roll was seen moving along a confused Biden after he wandered off.

Saturday’s rally was held 10 days before Ohio’s May 3 primary featuring a crowded GOP Senate primary race. There are seven Republicans vying for the chance to replace retiring Sen. Rob Portman.

Trump last week, after months of speculation on whether he would endorse in the Senate race, announced he is backing candidate J.D. Vance.

“He’s a guy that said some bad shit about me,” Trump said. “He did. But you know what, everyone of the others did also. If I went by that standard, I don’t think I would’ve endorsed anybody in the country,” Trump said of Vance on Saturday.

Donald J. Trump, Save America, Trump warning in Ohio: ‘Communism ‘starts … when you have no press’, WorldTribune.com

Trump warning in Ohio: ‘Communism starts … when you have no press’ added by Editor Two on April 24, 2022
View all posts by Editor Two →